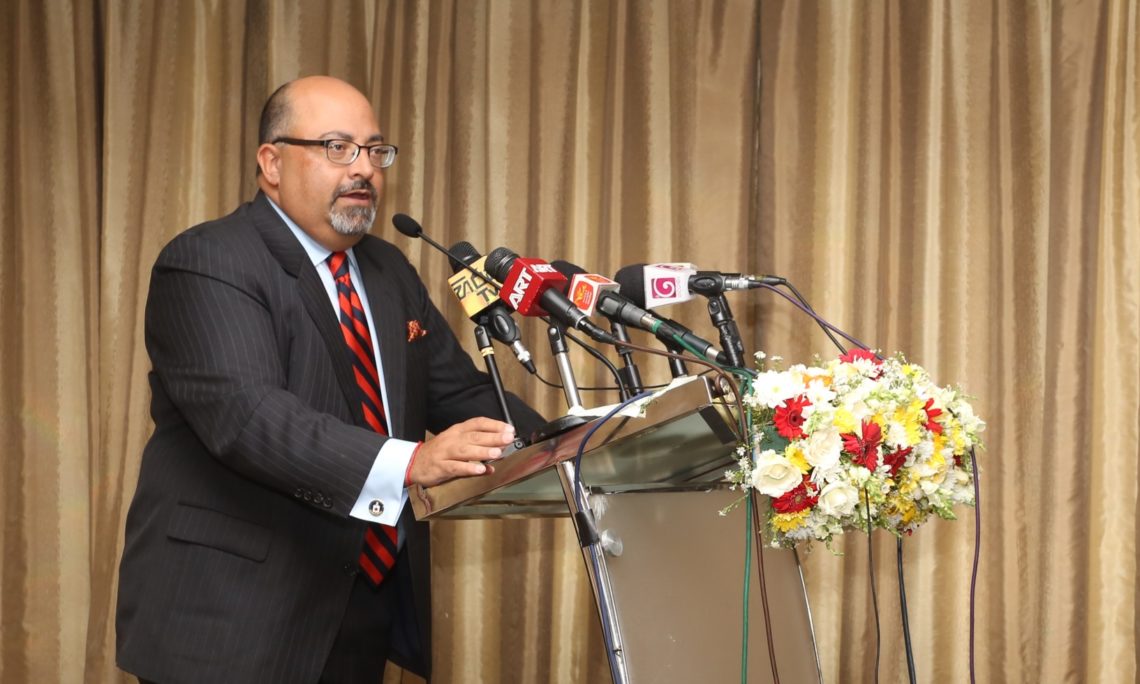 I want to thank the entire American Chamber of Commerce in Sri Lanka (AmCham) for putting this together.  It’s great to partner with you guys.  AmChams all around the broader Indo-Pacific are a wonderful way for American companies to show their value, transparency, highest standards of ethics, innovation, managerial excellence, and environmental stewardship.  So it’s always great fun to do AmCham events, especially here in Colombo.  I think the AmCham has a great record of organizing these kinds of events.

And I really want to thank Asia Foundation, as well – great friends, great partners, wonderful institution.  They put together a fantastic new book on the future of American presence in the Asia Pacific and Indo Pacific region.

I also want to greet my great friend Raja Mohan.  A colleague and distinguished friend of many years, he is someone who has a tremendous reputation as a true scholar of not only the rise of India as a global power, but also the very warm relationship between the United States and India that has grown by leaps and bounds during the time that Raja has been involved in working on strategic issues between our countries.

So it’s great to see all of you, and thank you again for bringing us all together.

I want to begin my remarks by saying that first of all, just here in Colombo right now, we find ourselves gathered at a time when the Sri Lankan people are facing yet again the challenges of a situation that has resulted in a significant loss of life, and a lot of people displaced from their homes and schools.  The U.S. government and the American people – as we have been for seven decades in the independent life of Sri Lanka – are with you as partners.  We are walking with you side by side, hand in hand.  We have got full efforts deployed on our part to show solidarity with the Sri Lankan people.

I was very honored to go and see His Excellency, the President Maithripala Sirisena, on Saturday night, to inform him that the American people were giving an aid donation of 350 million Sri Lankan rupees, which is $2.3 million United States dollars.  That would go toward reputable organizations and partners with whom we have had a good relationship for a long time and have a very strong track record on the ground.  Those organizations will help with immediate relief, and also with rehabilitation to get people back on their feet and back to their normal lives.  So that money is going out the door.

Then the other thing that we’re doing is, all of our service men and women who are here either permanently or were here doing exercises with the Sri Lankan military or were here for training courses, have all been deployed for the last few days helping out down south in the flood affected areas.  You’ve seen some of the pictures of our service men and women cleaning school desks, sweeping out schools, getting the mud out of classrooms.  We are working as hard as we can in the districts where we are deployed to try to make sure the kids can get back to school.

This is part of a very long commitment by the American people to the safety, stability, prosperity, and well-being of all the people of Sri Lanka – north, south, east and west – of any ethnicity, of any religion, of any walk of life.  We have an abiding and sustained commitment to the stability, prosperity, and democracy of Sri Lanka, and now at this time of need we are very much there with you and are trying to do the best we can to help the government.

I have my whole team working regularly with the government and I’m also having meetings to get a clear sense of what the government might need, and also look at ways that we can continue to strengthen our partnership in helping ensure that Sri Lankans have resilience in the face of these periodic floods.

We’ve worked with NBRO, DMC, Defense Ministry, and many other partners, the Health Ministry, Education Ministry, for many years.  Since 2001 the United States taxpayers and the American people have given over 19 billion Sri Lankan rupees in assistance to try to help with disasters and to try to ensure disaster resilience, including things like access to clean drinking water, whether in time of drought or in time of flood.  That’s one of those crucial needs of any population.  We’re working on that as well.

Friends, I want to talk to you a little bit about the role of the United States in the Indo-Pacific region.

We obviously understand fully the strategic importance of this region.  South Asia comprises one-fifth of humanity.  As Under Secretary of State Tom Shannon mentioned when he spoke at the Lakshman Kadirgamar Institute last year, when you look out from the ramparts of Galle Fort you can see the wheels and the engines of global commerce through all the shipping that is going between Malacca and Hormuz, right past Galle Fort.  The tankers, the container ships, the bulk cargo carriers, the car carriers.

So your country, Sri Lanka, sits astride some of the most strategic and vital sea lanes in the entire world.  And the U.S. has a very robust presence, of course, in the Atlantic and the Pacific, but even here in the Indian Ocean, the U.S. military has a presence because we believe in ensuring that the sea lanes as a common good should be available to all people.  That there should always be freedom of navigation and freedom of commerce, a rules-based international order, and a transparent way to resolve disputes.

In that, we really appreciate the example that has been made within the Indian Ocean region, for instance, by Bangladesh, Myanmar and India in settling their maritime and territorial disputes in a transparent, free and peaceful manner that involves binding arbitration that all the parties accepted.  This is the kind of model that we really appreciate, and I know that Admiral Harris spoke about this when he was here at the Galle Dialogue in November of last year.  Secretary of Defense James Mattis made a very strong statement of American commitment to its abiding principles when he was at the Shangri-La Dialogue in Singapore just a couple of days ago.  And I won’t repeat all that they said here, but I can tell you this commitment was reiterated whether it was Vice President Pence’s trip to Asia or Secretary Tillerson’s trip to see allies in Asia, or Secretary Mattis’ trip recently, and President Trump’s outreach to senior leadership across Asia.

I know that here in Sri Lanka we are dedicated to the proposition that Sri Lanka be a democratic, stable, peaceful, reconciled country with freedom and equal opportunity for all, and equal treatment for all.  This is a vision for Sri Lanka that’s very positive, it’s very optimistic.  We believe in the vision of the Sri Lankan people as articulated by their voters in January and August of 2015, in those two elections.  We are working very hard as a government and an embassy to help the people of Sri Lanka achieve that vision of a reconciled and prosperous country.  We have advisors working with the government.  We’ve got a development program.  We’ve got very robust military cooperation.  We’ve got a clear focus on human rights and religious freedom, the rule of law, transparency, and anti-corruption.

The women and men of the American embassy here are working in a sustained fashion in partnership with our friends in the Sri Lankan government because we believe and we hope, we expect and we pray that the Sri Lanka of today and going forward will be a pillar of security, prosperity, and democracy.  Not just here, and not just for its own people, but for people all around the Indian Ocean region.

At the end of the day, the Indian Ocean region in many ways is becoming the center of the world.  If you look at Robert Kaplan’s book “Monsoon,” or you look at Sanjeev Sanyal’s book “The Ocean of Churn,” it’s pretty clear that the Indian Ocean was, is, and will be in very many ways the geographic center of the entire world, with the civilizations of China and India, the Middle East, Africa, and Southeast Asia all gathered together in the littoral around this ocean.  You have a preponderance of global population within a very very short distance of Colombo.  Probably over the course of the next 30, 40, 50 years, you may have a preponderance of the global GDP within a very short distance of Colombo.

So friends, with those brief remarks I want to thank everyone – AmCham, Asia Foundation, and everybody else – for inviting me to come speak to you.  I really appreciate this opportunity.  I’m looking forward to hearing some of the comments by the very distinguished panel, and I want to thank you again for your enthusiasm for the subject.