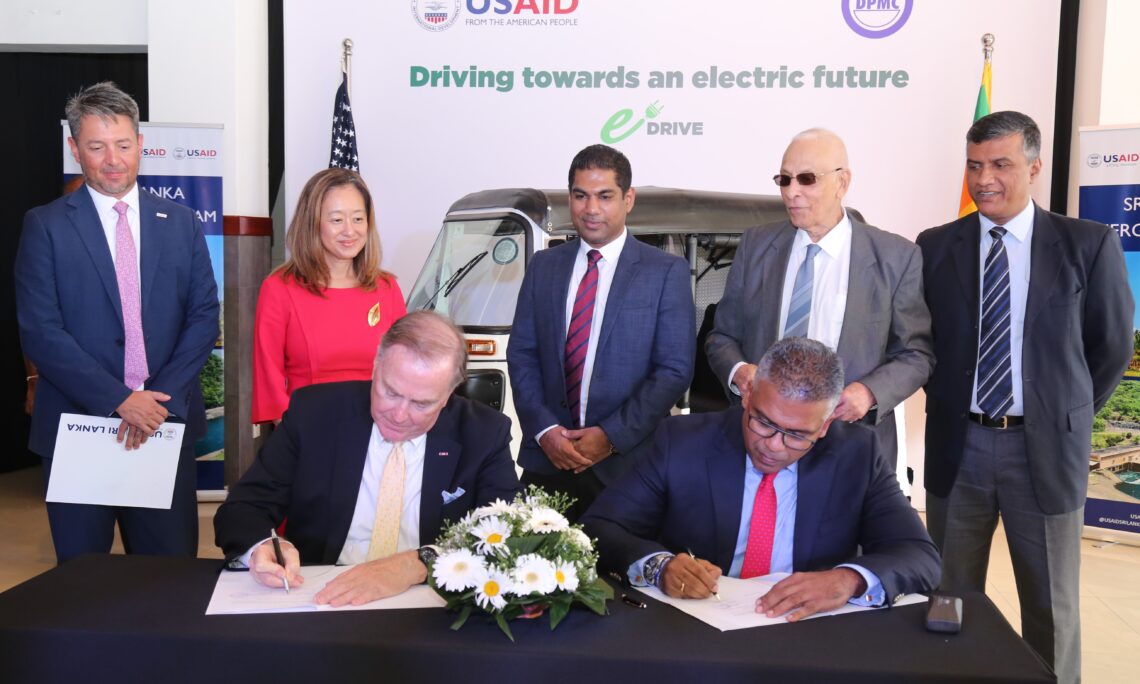 Colombo, August 16, 2022: The U.S. government, through its development agency, the U.S. Agency for International Development (USAID), is committed to accelerating clean energy to drive social and economic sustainable growth in Sri Lanka.

On August 16, Sri Lanka’s Minister of Power and Energy, Kanchana Wijesekera and U.S. Ambassador to Sri Lanka, Julie Chung attended a signing ceremony for a Memorandum of Understanding between the USAID Sri Lanka Energy Program and David Pieris Motor Company (DPMC) that will facilitate the electrification of three-wheelers, commonly known as “tuk tuks”.

Under this partnership, DPMC, Sri Lanka’s largest automotive company, will convert internal combustion engine three-wheelers to electric three-wheelers and offer after sales services through their island wide service centers. USAID-supported Sri Lanka Energy Program will provide technical assistance to DPMC and establish a network of charging stations that will help build an enabling environment for the uptake of electric three-wheelers.

“The partnership between USAID and DPMC to electrify three-wheelers is innovative and exciting, and it stands to greatly benefit Sri Lanka’s economy.  Plus, sustainable energy projects like this program help create a greener future for all Sri Lankans,” said U.S. Ambassador to Sri Lanka Julie Chung.

The transportation sector is the biggest contributor to greenhouse gas emissions in Sri Lanka. Transitioning to electric three-wheelers will help mitigate negative

environmental impacts, reduce dependency on fossil fuels, and will minimize the foreign exchange outflows for fuel.

“As pioneers who introduced and built the three-wheeler industry in Sri Lanka, creating sustainable employment for over 500,000 people along with convenient and accessible transport to supplement both public and personal transport island wide; DPMC is deeply committed to ensuring the successful introduction of the electric three wheelers. We have been on this journey since 2016 and have successfully converted and tested several prototypes. With support from the USAID Sri Lanka Energy Program, we are confident that the infrastructure required to ensure market acceptance and commercial viability can be established,” stated Rohana Dissanayake, DPMC’s Chairman and Managing Director.

Rick Whitaker, Chief of Party of the USAID Sri Lanka Energy Program, and Naalaka Madugalle, Director/Chief Operating Officer, DPMC signed and witnessed the agreement on behalf of their organizations.

This is the second partnership announced by USAID’s Sri Lanka Energy Program for electric mobility. In June 2022, the program signed a similar agreement with VEGA Innovations to promote electric three-wheelers and support the manufacturing of locally designed batteries and inverters.

The USAID Sri Lanka Energy Program is a key activity under the longstanding partnership between the American and Sri Lankan people. Since 1961, USAID has provided more than $2 billion (approximately 700 billion LKR in current exchange rate) to programs in support of economic development, entrepreneurship, women’s empowerment, and environmental conservation, as well as other sectors, in Sri Lanka. To find out more about USAID’s work, visit usaid.gov/sri-lanka.