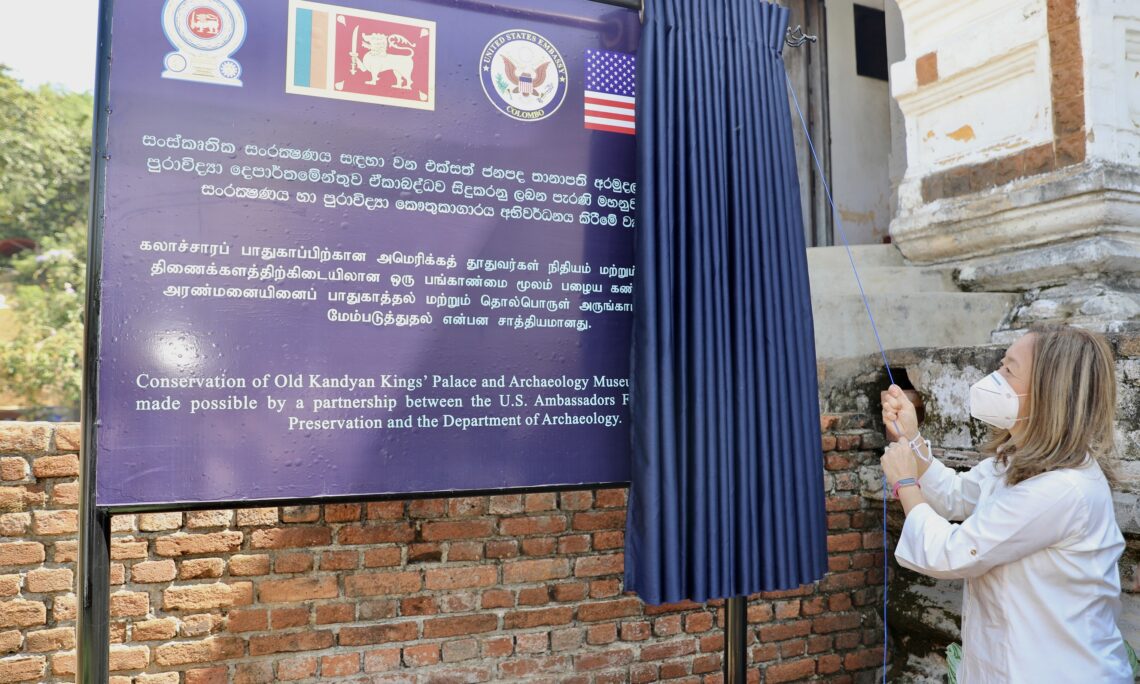 On March 14, Ambassador Chung and University of Peradeniya Vice Chancellor Professor M.D. Lamawansa held a closing ceremony for a U.S. Ambassadors Fund for Cultural Preservation (AFCP) project that documented and preserved four traditional ritual dance forms and related crafts.  The $116,000 grant, initiated in 2016, supported the university’s effort to preserve and to share the following performing arts traditions: 1) upcountry Kandyan Kohomba Kankariya dance, 2) Northern and Eastern Tamil Koothu dance drama, 3) Adivasi rituals and cultural practices from Eastern Province, and 4) a southern dance-drama rituals and performance from the Kolam tradition in Southern Province.  Recordings of these intangible forms of Sri Lanka’s heritage are now archived under the Department of Fine Arts, Faculty of Arts, University of Peradeniya.  For public and online reference, shorter videos will be available on the internet with links in the Department of Fine Arts website of the University of Peradeniya at http://arts.pdn.ac.lk/afcp/.  Ambassador Chung explained, “As a result of the collaboration between the U.S. Embassy and University of Peradeniya, the traditions of these cultures have been recorded and made accessible to future generations.  This entire effort demonstrates the deep respect and close partnership between our countries.”

On March 15, Ambassador Chung and Director General of Archeology Professor Anura Manatunga officially launched a new project: an AFCP partnership between the United States and the Sri Lanka Department of Archeology.  The $265,000 grant will support the conservation of the Old Kandyan Kings’ Palace and fund upgrades to the Archaeology Museum in the Kings’ Palace located within the Sacred Temple of the Tooth complex.  The conservation of these elements of the UNESCO World Heritage Site will provide future generations of students, scholars, Sri Lankans, and tourists the ability to view and continue to learn about the history of the ancient Kingdom of Kandy.  In her remarks, Ambassador Chung noted, “Today’s ceremony demonstrates the breadth and impact of the partnership between our two countries and shows that by celebrating the richness of our past we can create a stronger future.”

Since 2001, AFCP has funded 14 projects in Sri Lanka, including the conservation of the Rajagala Buddhist forest monastery, the preservation of Buddhist, Hindu, and other collections in the Anuradhapura Archaeological Museum, and the restoration of the Batticaloa Dutch Fort.  For further information about how AFCP supports cultural preservation in Sri Lanka, visit the U.S. Embassy website at https://lk.usembassy.gov/.