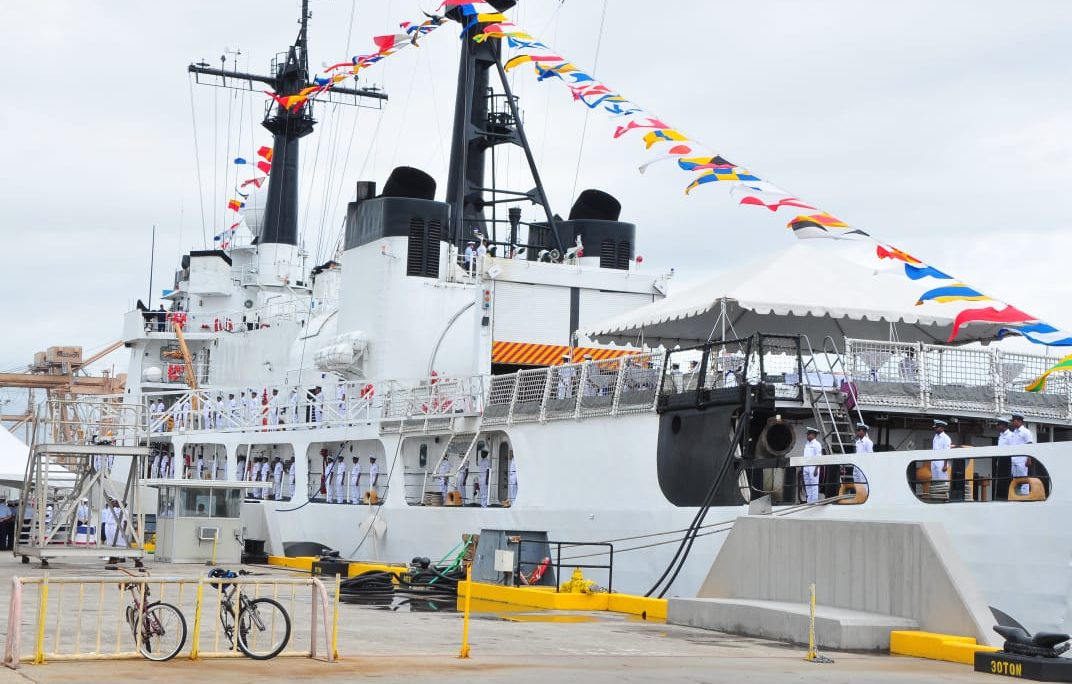 Honolulu, August 29:  On August 27, the U.S. Coast Guard handed over a high endurance cutter, formerly the USCGC Sherman, to the Sri Lankan Navy in a ceremony presided over by Vice Admiral Sirimevan Ranasinghe, Commander of the Sri Lankan Navy, and Rear Admiral Michael Haycock of the U.S. Coast Guard.  The cutter, a gift from the people of the United States, will be the largest ship in the Sri Lankan fleet and strengthens defense cooperation between the United States and Sri Lanka.  The ship will increase Sri Lanka’s ability to patrol its Exclusive Economic Zone, providing additional security for ships from all nations that transit the busy sea lanes of the Indian Ocean.  It measures 115 meters long and when fully staffed carries a crew of 167.

For over a month, 110 Sri Lankan sailors have been training with the Sherman’s crew on operating the vessel.  The handover builds on Sri Lanka’s first-ever participation in the U.S. Pacific Fleet exercise “Rim of the Pacific (RIMPAC) 2018” in July of this year and will increase interoperability between the two navies.

The sail-away date for the cutter will be in February 2019.  Overhaul and maintenance, as well as the training of the crew, will continue until then.  The gift of the cutter was first announced by former Under Secretary of State for Political Affairs Thomas Shannon during the U.S.-Sri Lanka Partnership Dialogue in November 2017.  The new ship will join the SLNS Samudura, also a former U.S. Coast guard vessel that was gifted to Sri Lanka in 2004.

The United States remains committed to our enduring friendship with Sri Lanka and we will continue to work together to advance prosperity and security for people in both our countries, the region, and beyond.