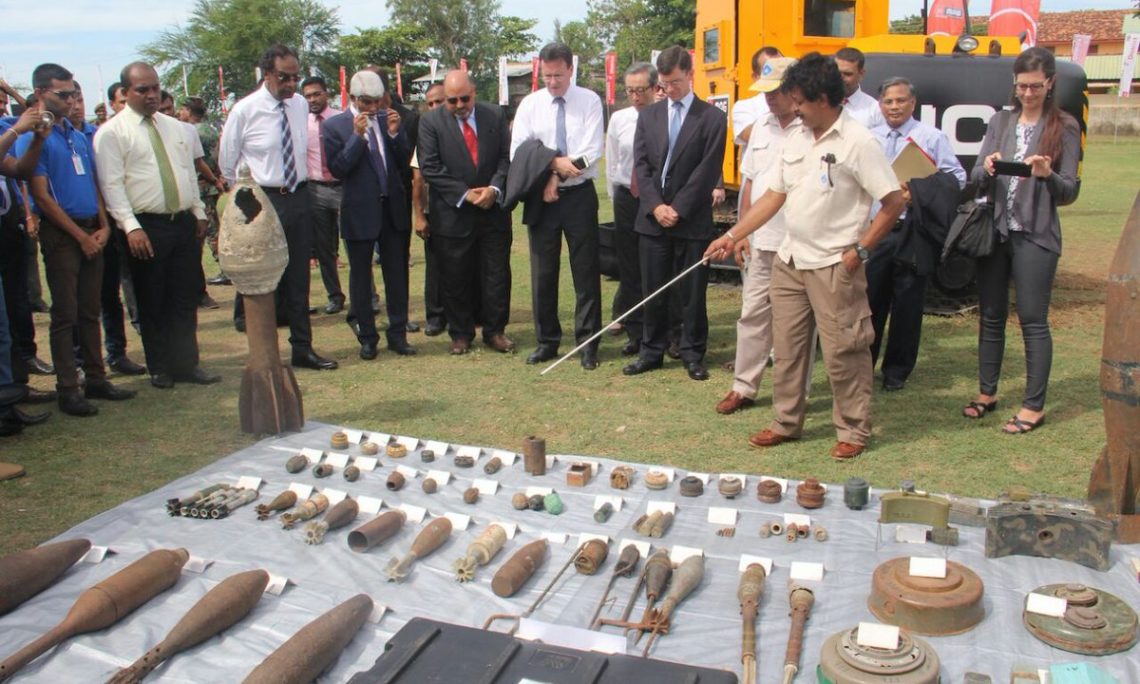 The demining ceremony in Batticaloa marks a milestone in the effort to reduce the dangers of landmines, becoming the first district in Sri Lanka to be reach “residual risk” status.

COLOMBO, June 22: U.S. Ambassador Atul Keshap visited the Eastern Province this week to commemorate a milestone in U.S.-supported demining efforts and to attend the groundbreaking ceremony at a school to construct facilities to help communities displaced by natural disasters.  During the visit, Ambassador Keshap also met leaders and activists working on post-conflict reconciliation and accountability issues.

Ambassador Keshap also paid respects to local religious leaders, including Jesuit Fathers Miller and Laurio, Americans who have each served the people of Batticaloa for over 60 years.  In addition, he hosted the U.S. Embassy’s first iftar in Batticaloa and met with Muslim community leaders, who stressed the need to modernize the outdated 1951 Muslim Marriage and Divorce Act.

The demining ceremony in Batticaloa marks a milestone in the effort to reduce the dangers of landmines, establishing the first district in Sri Lanka to be reach “residual risk” mine impact-free status since the end of the civil war.  Ambassador Keshap was joined by Hon. Minister D.M. Swaminathan of the Ministry of Prison Reforms, Rehabilitation, Resettlement and Hindu Religious Affairs, Eastern Province Chief Minister Hon. Nazeer Ahamed, and other foreign diplomats.  The United States government has contributed approximately LKR 8 billion ($53 million) for mine clearance, survey, risk education, and capacity building in Sri Lanka.

“While demining activity continues across the country, we are proud to work together with so many local and international partners to reach this milestone,” said Ambassador Keshap at the commemoration.  “We appreciate the leadership of the Sri Lanka Army and the National Mine Action Center to support the Sri Lanka government’s stated clearance goal by 2020.”

At the school groundbreaking, Chief Minister Nazeer joined Ambassador Keshap to dedicate the construction of new facilities at Al-Ameen Vidyalayam in Kawathamunai.  This is one of 13 projects in schools and medical centers in the Eastern Province to support communities affected by natural disasters like flooding.

“We thank the American people for their continued commitment to not just Sri Lanka’s school children, but entire communities when they are most in need,” said Al-Ameen school principal Mr. Firthouz.

“Families of the disappeared from all of Sri Lanka’s different communities have shown true heroism in their search for answers,” said Ambassador Keshap.