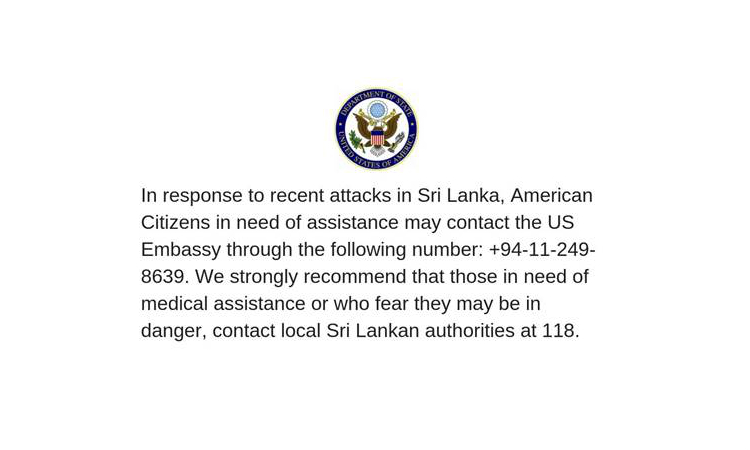 The White House
Office of the Press Secretary
FOR IMMEDIATE RELEASE
April 21, 2019

The United States condemns in the strongest terms the outrageous terrorist attacks in Sri Lanka that have claimed so many precious lives on this Easter Sunday. Our heartfelt condolences go out to the families of the more than 200 killed and hundreds of others wounded. We stand with the Sri Lankan government and people as they bring to justice the perpetrators of these despicable and senseless acts.

Statement from the Secretary of State Michael R. Pompeo

The United States condemns in the strongest terms the terror attacks in Sri Lanka on Easter morning. Attacks on innocent people gathering in a place of worship or enjoying a holiday meal are affronts to the universal values and freedoms that we hold dear, and demonstrate yet again the brutal nature of radical terrorists whose sole aim is to threaten peace and security.The United States offers our deepest condolences to the families and friends of those killed and wishes a quick recovery to all who were injured. While many details of the attacks are still emerging, we can confirm that several U.S. citizens were among those killed. The U.S. Embassy is working tirelessly to provide all possible assistance to the American citizens affected by the attacks and their families.These vile attacks are a stark reminder of why the United States remains resolved in our fight to defeat terrorism. We stand with the Sri Lankan government and people as they confront violent extremism and have offered our assistance as they work to bring the perpetrators to justice.

“On behalf of the men and women of DHS, I want to express condolences and sympathies for those affected by the Easter Sunday attack on multiple hotels and places of worship in Sri Lanka.

“DHS stands resolutely with persons of every faith who look to worship in safety and peace. We will continue our work with partners around the world to ensure that all are able to worship without fear.

“As the Department has made clear regarding attacks on members of multiple faiths: religious liberty for all is a hallmark of this country and attacks on peaceful people in their places of worship are abhorrent and must not be allowed.

“At this time we are not aware of any current, credible or active threat domestically. Regardless, the Department is doing all it can to protect the homeland from potential violent extremists.

“We will continue to monitor the situation as the response to this tragedy unfolds and investigations continue.”

Lead Republican McCaul: “I am horrified by the terrorist attacks that took place in Sri Lanka this morning leading to over 200 deaths and hundreds of casualties on Easter Sunday. This cowardly attack that targeted innocent individuals in hotels and places of worship, including the Catholic church, is a stark reminder that radical extremism endures as a global threat. The international community must band together to condemn any and all forms of terrorism and threats targeting religious freedom. My heartfelt condolences go out to the victims and families affected by this tragedy, including the loved ones of several American citizens killed in the bombings. While we are still monitoring the situation as details emerge, this was a sophisticated attack that bears at the hallmarks of an established terrorist organization. The United States stands in solidarity with the people of Sri Lanka in the aftermath of this horrific act of violence to confront global hatred and terrorism wherever it exists.”