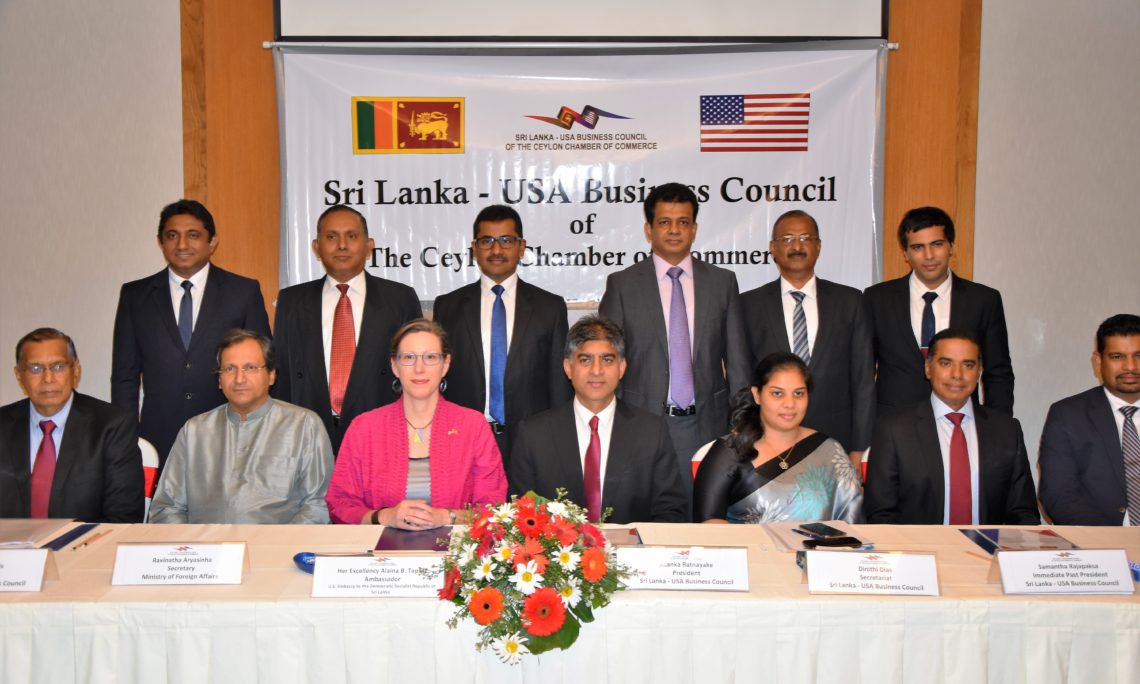 Good evening.  It’s a pleasure to see everybody here.  I’m very pleased to join you at the third annual general meeting.  And thank you very much to Asanka and Samantha for inviting me to speak with you tonight.  I think it’s a great opportunity to address some of the business of the day.

I want to talk a little bit about U.S. government efforts to help grow business and investment opportunities in Sri Lanka.

Since Sri Lanka’s independence, the United States has furnished over a billion dollars in grants and direct development assistance, none of which must be repaid, over our long history – 70 years.  These funds have helped Sri Lanka eradicate disease, boost agricultural production, and educate the young people of this country.  They stimulated research and development, promoted the arts, and helped the country recover from natural disasters.

I think though, now that we are a quarter of the way through the 21st century it’s time to work on expanding our partnership in a different direction.  Beyond that of a donor and recipient, toward that of equal partners.  As Ambassador, strengthening the commercial ties between our nations is among my top priorities.  I think that’s the direction that we need to head in.

The United States believes that the strong and inclusive economic growth we hope to see globally and hope to see in Sri Lanka is essential, in fact, here in this country.  It’s essential for the defense of Sri Lankan sovereignty and to the advancement of peace and reconciliation on the island.  And inclusive growth is also essential to the future of prosperity of the Sri Lankan people, of course.

Frankly, this need for inclusive economic growth is true for all nations.  As they say, a rising tide lifts all boats.  And it’s in this context that I want to speak with you about the Millennium Challenge Corporation Compact that you’ve probably heard a lot about, and understanding that in the context of our efforts to strengthen commercial relationships.

So let me start with a few key facts about this proposed five-year assistance agreement.

The Millennium Challenge Corporation is a U.S. government development assistance agency.  I’m sure you’ve heard of USAID, the Agency for International Development.  Well, MCC is similar, but its projects are strictly time-bound, and it’s often focused on large infrastructure.

Since 2004, the U.S. has invested $14 billion in 37 MCC compacts with 29 countries around the world.  So for example, what do these compacts look like?  For example, in the country of Georgia, the U.S. government is increasing the number of internationally accredited degrees in science, technology, engineering, and in medicine.  In Senegal, another country where we have a compact, we are working to strengthen the power sector to meet the growing demands for reliable electricity.  And in Nepal, where I had the honor of signing the first MCC agreement in South Asia, these funds are helping to address the problem of low energy supply and high energy transportation costs.

The compact that you have been reading about in the media, in fact the compact discussed several times with members of this organization, the Ceylon Chamber, and many others, is a development assistance agreement.  It is nothing more and nothing less.

And what about Sri Lanka?  What is this compact meant to do here in this country?  Well, in order to promote inclusive economic growth and development, the United States has offered the government and people of Sri Lanka a $480 million grant.  A gift, not a loan, but a gift from the people of the United States.  This is not a loan that might mortgage the future of the country.

What would this grant support?  Efforts to improve the transportation infrastructure and to implement the Sri Lankan government’s land administration reforms.  All without adding a single rupee to this country’s debt.

There has been considerable misinformation in the media regarding the MCC grant, so I’m going to share some more facts.

The governments of Sri Lanka and the United States collaboratively developed the proposed agreement with significant input, as noted earlier, from the private sector and civil society.  From potentially some of you sitting in this very room – from the Council, from the Chamber, from the AmCham.

Development needs in transportation and land administration were identified as the most significant binding constraints to economic growth in this country, and that’s why these are the two sectors addressed by the MCC grant.

Under this agreement Sri Lanka will retain oversight and control of all aspects of the proposed projects, all the roads undergoing improvement, every traffic signal and bus network upgraded, and every aspect of the effort to digitize land records and to produce accurate land surveys.  The United States will not own, control, or in any way administer any land under this agreement.

Let me start with the first project under the compact because undoubtedly it impacts your business and your personal lives.  It’s the project addressing traffic congestion.  How do we propose to address the traffic congestion around Colombo and other parts of the island?  Through an advanced traffic management system and bus modernization program.  Improved mobility is vital to unlocking the economic potential of Sri Lanka.  A 2014 Moratuwa University study estimated that there are 1.9 million trips per day along the main road corridors connecting Colombo with its suburbs.  1.9 million trips.  That was in 2014.  That number is expected to increase to 4.5 million trips a day by 2035.

So imagine today’s traffic more than doubling, and then imagine yourself writing a check to pay for all of that congestion because that’s in fact what you’re going to be doing if this gridlock is not mitigated. Moratuwa University estimated the economic cost of congestion, mostly reflected in lost time, as a result of longer commutes to be about 400 billion rupees a year in 2014.  That was estimated to increase to 1.8 trillion rupees in 2020.

So companies, whether it’s a SME or it’s a large business, might be transporting product to markets or bringing goods to ports or even taking tourists to visit attractions.  But that company’s bottom line depends on a well-functioning road network.  Frankly, as does the peace of mind of just about anybody driving on Colombo’s roads.

The bus modernization activity is essential because buses are the main mode of transportation for roughly half the population, and especially the poor.  The MCC grant will be used to introduce automated fare collection systems based on smart cards and will help state and private bus operators purchase new state-of-the-art buses among other things.

The value proposition here is that the United States government is willing to contribute, to give, $350 million to help fix this problem while also upgrading 131 kilometers of interprovincial roadways.  Those connecting the Central, Sabaragamuwa, Uva, and Eastern Provinces with the markets and ports in the Western Province.  As a result, the United States hopes the Sri Lankan economy will grow.

So what’s in it for us?  The great private sector opportunities presented by a strong economy.  A rising tide will lift all boats.

The land administration portion of this program has attracted much attention, perhaps much more than the transport component, even though the dollar value of this program is much less.  The WIIFM, the What’s In It For Me for the government and people and for businesses, businesses like many of you represent, of Sri Lanka is to develop a more dynamic land market.  One that is supported by policy reforms, that offers individuals clear, transferrable titles, and by strengthening digital systems of land information and registration, such as the E-State Land Information Management System and the E-Land Registry that are already in use.

With better land information systems, for example, future Sri Lankan governments will have an improved fix on the size of all of the state land, all those lands vested in the various ministries and departments, as well as a clear picture of the value of those lands through improved appraisal methods.  And you as Sri Lankan taxpayers, by extension, will also know that.

Additionally, Sri Lankan citizens will be able to convert their deeds and titles into digital form, protecting their paperwork from damage, loss, and theft.  Transparency and accountability are good for business and good for individuals.

What is in it for us is exactly as I said before.  Remember, I said one of my top priorities was strengthening commercial ties between our countries.  Some countries promote commerce by subsidizing state-owned companies or by making backroom deals.  The United States promotes business by helping to improve economies, creating more opportunities for the private sector to compete and more opportunities for communities to become prosperous.

I don’t think it will surprise you that from the American perspective a thriving, growing Sri Lanka will be a more dynamic market for U.S. goods and services.  We are, as Samantha said earlier, after all Sri Lanka’s largest trading partner and number one export destination.  An expanding economy spells growing business opportunities and the chance to eliminate poverty.  It means a win/win for our country.  That’s what’s in it for me and for you.

So in conclusion, I believe the private sector has a key role to play in creating a thriving, global economy of the future.  We would like to support that effort.  The United States values new ideas, new approaches, and more effective and affordable products and services that help us all work more productively and meet new needs.  In fact, I encourage all of you as members of the private sector to take a look at the procurement, partnership, and investment opportunity that you can find on the Work With Us page on the MCC web site at www.MCC.gov.  In fact, at that website you can also find all of the MCC agreements with other countries.  They’re all there.

The world is safer and more secure when strong, sovereign, and capable nations partner together.  The United States is working to expand economic opportunity around the world, because we know that transparency and inclusive economic growth improves lives.  We believe that a rising tide lifts all boats.