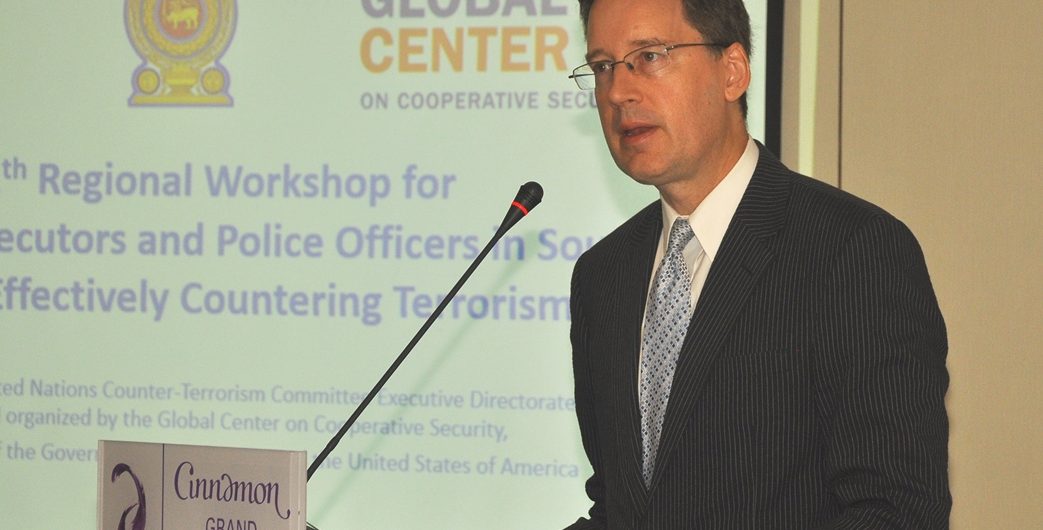 State Secretary, High Commissioner, colleagues from the United Nations, conference participants, ladies and gentlemen, good morning.  It gives me great pleasure to represent Ambassador Atul Keshap, the U.S. Embassy in Sri Lanka and my colleagues in the Department of State as you begin this 11th regional workshop for judges, prosecutors, and police officers on effectively countering terrorism in South Asia.  I am pleased that our financial support has made this week’s workshop possible.

We are privileged to have with us today an illustrious group of practitioners and leaders.  Thank you for taking the time to travel to Colombo to participate in this event.  I appreciate the opportunity to speak with you and want to thank the Government of Sri Lanka for hosting this important discussion.

Since January 2015, Sri Lanka has shown that safeguarding security and promoting human rights are not mutually exclusive but rather mutually reinforcing.  Sri Lanka initiated a comprehensive review of the Prevention of Terrorism Act to ensure compliance with international law and human rights.  In January 2016, the President issued a directive to all police officers on the rights of arrestees and the prevention of torture.  In May, the government ratified the UN Convention on Protection of Persons from Enforced Disappearances.  These are just a few of Sri Lanka’s achievements toward its commitment to meet its international obligations.  We will continue to stand with Sri Lanka as a partner as it continues to make progress, including replacing the Prevention of Terrorism Act and ensuring compliance with instructions.

Nations around the world face significant new challenges as we contend with the return of foreign terrorist fighters from Iraq and Syria, the risk of terrorist groups exploiting migratory movements, and terrorist groups exploiting technology and communications to recruit supporters and to inspire attacks using publicly-accessible platforms and applications.  The success of counterterrorism efforts increasingly depends upon capable civilian partners.  Police, investigators, and prosecutors are on the frontlines of preventing and responding to asymmetric attacks by terrorist groups, especially attacks on so-called soft targets.  Moreover, local law enforcement, prison officials, religious leaders, and community leaders are on the frontlines in preventing and countering radicalization and recruitment to violence in their communities.

We have learned over the past decade that it is not enough to degrade and disrupt terrorist groups through security measures.  To be effective over the long run, we must also address the ways in which these groups draw local support and attract new recruits, while intervening in the life cycle of violent extremism.  While there will never be justification for acts of terrorism, we must seek to understand and address the factors that drive people to such evil.  The nature and range of possible drivers can vary greatly – from individual psychological factors to community-based grievances, sectarian divisions, and religious intolerance.  However, there are certain common factors that breed or help to accelerate violent extremism in communities, including exposure to terrorist propaganda and locally-influential recruiters, experiences with state-sanctioned violence and abuse, heavy-handed tactics by security services, and the systematic denial of opportunity and basic human rights.

This workshop exists to strengthen counterterrorism capacities by providing an unconventional forum for judges, prosecutors, and senior-level police officers to consider specific issues that arise in the context of terrorism-related cases.  Such capacity-building initiatives provide an important platform for regional counterparts to share their experiences, exchange thoughts on lessons learned and best practices, and to discuss key challenges.

In closing, I would once again like to thank the Government of Sri Lanka for its support of this initiative and its gracious hosting of this workshop.  I would also like to extend my gratitude, on behalf of the United States, to all of the participants who took the time to be here this week and assist in making this initiative a success.