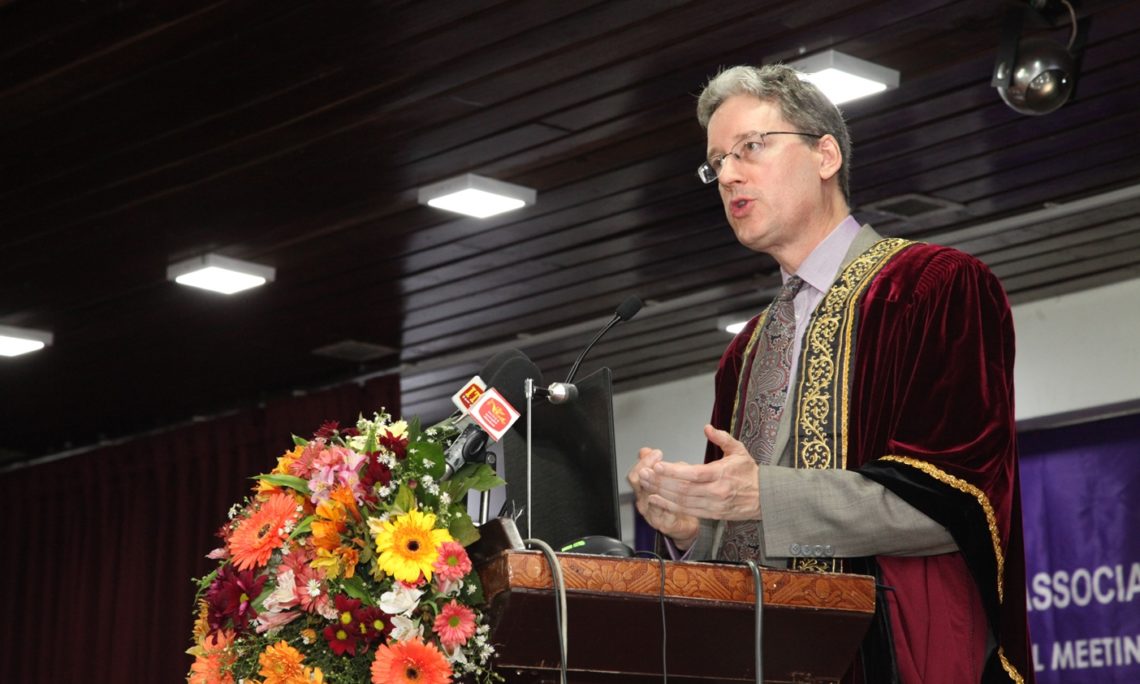 Dr. Pradeepa Wigetunge, Mr. R.P. Perera, members of the board of the Sri Lanka Library Association (SLLA), thank you for inviting me to join you today.  Recipients of certificates and medals, awards and fellowships, congratulations to you.  This is your day.  And congratulations to your family members and friends who are here as well.  On behalf of Ambassador Atul Keshap and the U.S. Embassy in Sri Lanka, I am pleased to congratulate the SLLA on its 57-year history of service to the people of Sri Lanka.

The U.S. Embassy in Colombo and the SLLA enjoy a long history of collaboration, beginning with the association’s second Vice-President, Ms. Margaret Guneratne, who was also the librarian for the former United States Information Service.  I began my diplomatic career with the former U.S. Information Service, or USIS, and had the honor to be associated with USIS libraries in Dhaka, Bangladesh and Moscow, Russia, among other places.

The successors to those libraries are what we today call American Spaces.  The U.S. Embassy operates American Spaces in Colombo, Kandy, Jaffna, and Malé, Maldives.  These Spaces provide information about the United States; facilitate English language learning; promote U.S. higher education; conduct programs on diverse topics including entrepreneurship, STEM education, and American culture; and support continued engagement with alumni of U.S.-government sponsored exchange programs.  American Spaces allow us to engage with youth and civil society members on issues that advance the U.S.-Sri Lankan bilateral relationship.  The Spaces are free and open to all, and the programs that we organize are almost always cost-free as well.  I am sure that many of you are already familiar with our American Spaces, but if you are not, I encourage you to reach out and learn more about how we can work together.

Between October 2016 and May 2017, there were over 31,000 unique visitors to the Embassy’s four American Spaces.  During this time period, American Spaces coordinated over 800 programs on English language learning, human rights, entrepreneurship training, combating gender-based violence and women’s empowerment, reconciliation, cultural presentations, and other thematic topics.  These programs involved over 10,000 participants.

Let me offer a few examples of recent or forthcoming programs at our American Spaces:

I want to take a moment to mention our American Space in Malé, Maldives.  The U.S. Government is concerned about the shrinking space for free speech and democracy in the Maldives.  Two weeks ago, Ambassador Keshap opened a new American Space in Malé that will, we hope, be a place where people can come together to talk about issues that matter to them, connect with one another and to the United States and the wider world.  We want this to be a safe space and a community space, in the manner of libraries in Sri Lanka and around the world.

Libraries have played an important part in my own life.  I want to show you three library cards.  The first is from the Peter White Public Library in my home town of Marquette, Michigan.  Growing up in a small town, at the time that I did, the library was for me a portal to a wider world.  I would ride my bike to the library and return home with a backpack full of books to keep me amused and engaged during long summer days and cold winter nights.  The library was founded in 1871 by a local benefactor who provided $5000 for establishment of a library, including the purchase of books and bookcases.

Second is my card from the Colombo Public Library, right here in Colombo 7 where I live.  I had the privilege of a tour of the library a few months back, at the end of which I signed up for a card so that I can, on long summer days or hot winter nights, pick up a good book to read without going far from home.

Finally, my card from the Washington, D.C., public library system.  For the past 30 years or so, when I am not serving overseas as a U.S. diplomat, Washington has been my home.  The D.C. Public Library has more than 25 branches throughout the city, in addition to the head library, which is called the Martin Luther King Jr. Memorial Library after our great civil rights leader – and although you can’t see it from where you are sitting, Dr. King’s picture is on my library card.

When listing libraries I love I cannot forget a library where I was once an employee, the Graduate Library at the University of Michigan.  While a student at the university I had one of the best jobs ever, collecting and shelving books.  I fear however that I was not a very productive employee.  I would roll a cart of books into the stacks and begin placing them on the shelves, but before too long, I would pull down a book and start to read it.  30 minutes would pass before I got around to putting another book in its place on the shelf.  It was a wonderful experience, and I became proficient in the Library of Congress cataloging system as well.

The Library of Congress is currently the world’s largest library in terms of collection size.  It contains everything published in the United States and a good percentage of everything published everywhere else.  The library was founded in 1800 by an act of the U.S. Congress with an appropriation of $5000 – coincidentally the same amount that started my hometown library 75 years later.  In 1814, however, the library was destroyed when invading British troops burned much of Washington D.C. during the War of 1812.  Former President Thomas Jefferson offered to sell his personal library to the nation to re-found the Library of Congress.  His collection of some 6500 books was the seed from which today’s Library of Congress has grown.  Libraries overcome adversity.

I was reminded of this history when I visited Jaffna last fall.  You all know of the tragic destruction of the Jaffna Public Library that occurred in 1981.  The U.S. Government and many other foreign donors as well as the Sri Lankan Government helped restore the building to its former state, although many items in the collection are irreplaceable.  I toured the library and was happy to see, among other things, two young boys playing carom.  I was reminded that libraries can overcome adversity and be safe spaces and community spaces.

In closing I want to tell you a bit about the current Librarian of Congress, the person in charge of the Library of Congress.  Dr. Carla Diane Hayden is the 14th Librarian of Congress and is the first woman and the first African-American to hold the post.  She is also the first professional librarian elected to the post in over 60 years, and is a past president of the American Library Association (ALA), which I hope makes you, as professional librarians, feel particularly proud.

From 1993 until 2016, Dr. Hayden was the CEO of Enoch Pratt Free Library in Baltimore, Maryland.  In April 2015, rioting and demonstrations broke out in Baltimore following the funeral of Freddie Gray, a young African American who died while in police custody.  Many places of business, schools and even churches shut down for days, fearing the violence outside.  The Enoch Pratt Free Library, however, did not close.  It stayed open, at Carla Hayden’s direction, so that residents would have safe haven from the chaos.  “We knew the people would count on the library being open,” Hayden said in an interview. “There were people waiting to get in, to use the computers, to apply for jobs. There were children that couldn’t go to school. There were people that needed to find resources, that just needed a place to be and there was this oasis right in the middle of all of that unrest.”  Libraries as safe spaces, libraries overcoming adversity.

I do not wish for any of you a situation like the burning of the Library of Congress, or the destruction of the Jaffna Public Library, or the riots that endangered the Enoch Pratt Free Library.  I do hope that you are inspired by the strength and resilience shown by those institutions and the people who led them.  Yours is a powerful and important profession.  Thank you for the vital role you play in society, congratulations again, and good luck in the future.