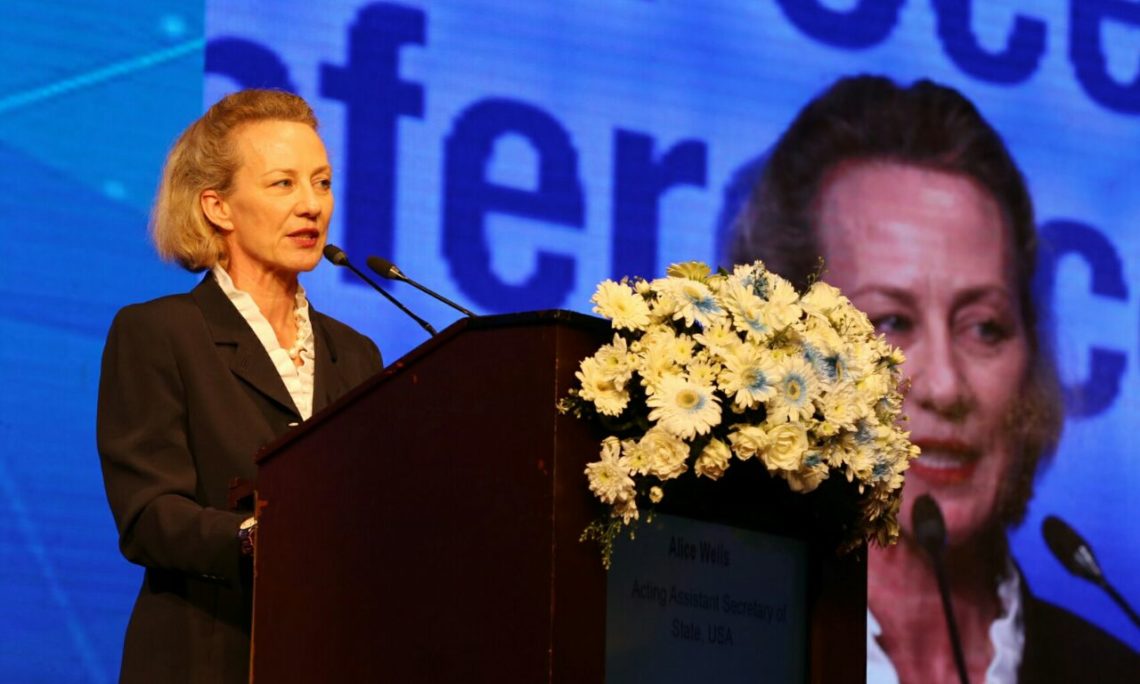 I want to thank the India Foundation and our partners in Singapore and Sri Lanka for your leadership in organizing this conference.
And let me begin by reaffirming a longstanding facet of U.S. foreign policy: that the United States is and will continue to be an Indo-Pacific power. Our close bilateral relationships and partnerships with countries around the oceanic littoral greatly augment our continued presence in Manama, Darwin, Diego Garcia, Singapore and elsewhere around the region.

For more than seven decades we have embraced the commitment to protecting and sustaining the global operating system of rules and norms that have unleashed unprecedented levels of prosperity across the Indo Pacific and around the world. This will not change in the decades to come because we recognize the strategic and economic importance of this great ocean, including the sea lines of communication that flow between Malacca and Hormuz and around the southern tip of Sri Lanka, carrying a tremendous percentage of the world’s trade and energy supply.

America’s connection to this dynamic region is not new. More than two centuries ago ships from New England sailed along trade routes in the Indian Ocean, carrying spices, tea, and even ice between Boston and Kolkata. Here in Sri Lanka the first reported arrival by Americans was over 200 years ago, in 1816.
Fast forwarding to today, our partnerships and shared strategic interests in this region remain as compelling as ever. In the next few minutes I want to share our vision for the Indian Ocean as well as the precepts guiding U.S. engagement and diplomacy.

First, we must have a common vision for the Indian Ocean that enhances economic growth, transparent development, and regional integration. Regional initiatives that prioritize accountability, open markets, and delivery of tangible benefits to citizens in the region will be the most obtainable.
Second, countries must be able to effectively counter security threats in the Indian Ocean, as well as respond to humanitarian and environmental disasters.
Through Joint Capacity Building and exercises, we can share the security burden in this increasingly complex region.
And finally, we must support the principled regional architecture that unites us to uphold international standards, including freedom of navigation and the peaceful resolution of disputes.

All nations have the right to freely fly, sail, and operate wherever international law allows.

So let’s start with the economic imperatives. The Indian Ocean, as you have heard, is the fulcrum of global trade and commerce with nearly half the world’s 90,000 commercial vessels and two-thirds of the global oil traveling through its sea lanes. The region boasts some of the fastest growing economies on earth and is home to a quarter of the globe’s population, 500 million of whom who still lack reliable access to power. We believe that bolstering economic integration will lead to sustainable and inclusive growth.

For example, if South and Southeast Asia reduced non-tariff barriers by 50 percent, an ambitious but attainable goal, increased inter-regional trade would net 568 billion in increased GDP by 2030. Already American companies are operating across the region, supplying everything from bottled drinks to airplane parts. In India alone, over 600 American companies have contributed to a 500 percent increase in foreign direct investment over the past two years. The United States plans to deliver 600 million dollars of investment into Nepal’s transportation and energy sectors, yet another sign that our commercial ties to the Indian Ocean are growing deeper every day. And we’re partnering with South Asian countries to develop legal and regulatory regimes that encourage transparent foreign direct investment, build resilient energy infrastructure, and connect budding entrepreneurs to the resources they need to develop their ideas.
As President Trump and Prime Minister Modi underscored in a June summit, both India and the United States are committed to bolstering economic connectivity through transparent infrastructure development and responsible debt financing practices. The U.S. is building partnerships through the Safe Ocean Network to combat illegal, unreported, and unregulated fishing, an issue which threatens maritime economies around the world. And this initiative encourages coordinated action to detect violations, enforce laws, and prosecute those engaged in illegal activities.

In South Asia, our regional partners are doing their part. India is forging stronger trade and infrastructure ties with its neighbors through its Act East policy. India, Bangladesh, and Nepal are implementing a motor vehicle agreement that allows the free movement of goods and people across the borders. And right here in Colombo, our Container Security Initiative is helping ensure the security of the Port of Colombo, helping it grow to become the most important trans-shipment port in all of South Asia.

We also commend the progress we see in BIMSTEC and hope the agreements on electricity grid connectivity and transport can be finalized before the next summit.
While the region offers unprecedented opportunity, it also confronts a myriad of security challenges including terrorism, transnational crime, trafficking in persons, and illicit drugs. And to combat these challenges, the United States has sought to improve intelligence sharing among regional partners and improve capacity building in areas such as community policing, counter narcotics, aviation security, container security, non-proliferation, and forensics analysis. There is also a critical initiative to expand engagement on maritime domain awareness. In the increasingly crowded maritime environment, the sharing of reliable information is the foundation for greater cooperation.

The United States is also committed to building the coast guard capacity of our Indian Ocean partners. Two weeks from today Japan will be hosting a Global Coast Guard Forum, enhancing cooperation on maritime pollution, law enforcement, search and rescue, and many other issues. And every nation here is encouraged to attend.

Expanding naval cooperation is another priority. The U.S., India, Japan Malabar naval exercise in July was our largest and most complex to date, involving over ten thousand personnel. And we’re expanding our Navy-to-Navy relationships with Sri Lanka with our first-ever naval exercise set for October. And with Bangladesh we value our continued engagement through regular exercises like our Southeast Asia Cooperation and Training series. We hope that one day in the not too distant future all the navies of the region can jointly participate in exercises and coordinate maritime activities to build a collective capacity that upholds international standards.

But in order to realize our shared goals of an Indian Ocean region that is open, principled, and resilient, we will need a robust regional framework for bilateral and multilateral cooperation. One in which all states have a say, and are invested in decision-making and outcomes.

Regional partners we believe should adhere to a common vision that respects international law as reflected in the law of the sea convention, that ensures a framework for transparency and for the peaceful resolution of disputes, and that supports economic and political and social linkages through South and East Asia, that develops the region’s humanitarian disaster relief capacity through maritime exercises involving all the Indian Ocean partners. And that encourages Indian Ocean economies to embrace visa liberalization, competitive markets, and accessible medical and educational facilities.

Last month, President Trump proclaimed that the United States is committed to pursuing our shared objectives for peace and security in South Asia and the broader Indo-Pacific region. Our desire for a common vision signifies our enduring commitment to this region and our shared goals of promoting peace, security, freedom of navigation, and a sustainable and open architecture across the Indian Ocean. We invite every nation here to join in this common endeavor and through our collective leadership, we can be the model for the rest of the world.