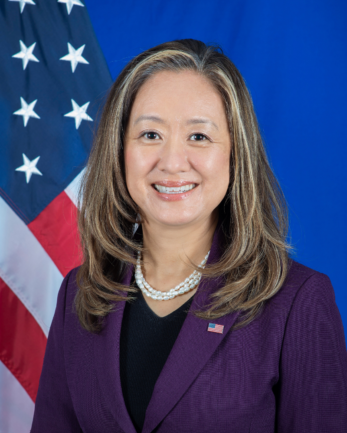 Nominated by President Joe Biden and confirmed by the U.S. Senate, Ambassador Julie Chung has been the U.S. Ambassador to Sri Lanka since February 2022. A career member of the Senior Foreign Service with the rank of Minister-Counselor, Ambassador Chung has previously held senior positions throughout the Indo-Pacific and Western Hemisphere.

Prior to her current role, Ambassador Chung served as the Acting Assistant Secretary in the U.S. Department of State’s Bureau of Western Hemisphere Affairs. She also has extensive experience in the Bureau of East Asian and Pacific Affairs, including as the Acting Deputy Assistant Secretary for Japan, Deputy Chief of Mission in Cambodia, and Economic Counselor in Thailand. In addition, she has served at the U.S. embassies in Iraq, Colombia, Vietnam, and Japan, and the U.S. Consulate in Guangzhou, China. She also served as an advisor on nonproliferation discussions of the Agreed Framework with North Korea while working in the Office of Korean Affairs in Washington.

As a child, Ambassador Chung immigrated to the United States from Korea and was raised in Huntington Beach, California. She received a B.A. in Political Science from the University of California San Diego and an M.A. in International Affairs from Columbia University and joined the Foreign Service in 1996 in the first cohort of the Thomas R. Pickering Fellowship program. Ambassador Chung has been the recipient of numerous awards, including the Presidential Rank Award and the Secretary’s Distinguished Honor Award, and speaks Korean, Japanese, Spanish, and Khmer.