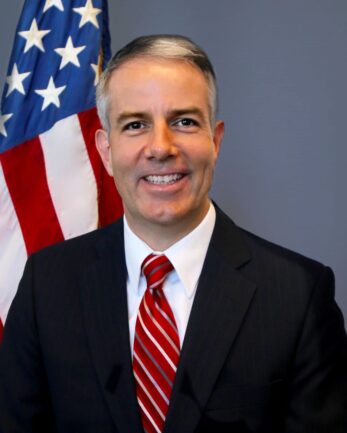 Doug served as Director of East Asian and Pacific Affairs Bureau’s Office of Economic Policy from July 2017 to 2019, coordinating U.S. government participation in Asia Pacific Economic Cooperation (APEC) and economic policy in the region.  As Deputy Chief of Mission at the U.S. Embassy in Suva from 2014 to 2017, he advanced U.S. economic, political and security interests in Fiji, Kiribati, Nauru, Tonga, and Tuvalu.  He led the Political and Economic Section at the U.S. Embassy in Rangoon, Burma from 2011 to 2014, advising Embassy leadership on political and economic issues affecting U.S.-Burma relations during a period of rapid change in bilateral relations.

From 2005 to 2010, Doug focused on Vietnam – first as the Bureau of East Asian and Pacific Affair’s Vietnam Desk Economics Officer then as Economic Section Chief at the U.S. Consulate General in Ho Chi Minh City – during which time U.S.-Vietnam bilateral trade and investment grew ten-fold.  His career in the Department of State has also taken Doug to the U.S. embassies in Ljubljana, Slovenia and Beijing, China, where he specialized in trade and investment issues, and the U.S. consulate in Shenyang, China.

Before joining the State Department, Doug spent three years as a Peace Corps Volunteer, first in the Central African Republic then on the South Pacific island-nation of Niue.  Doug is a graduate of Carleton College in Northfield, Minnesota.  He and his spouse Winnie have two teenage children.