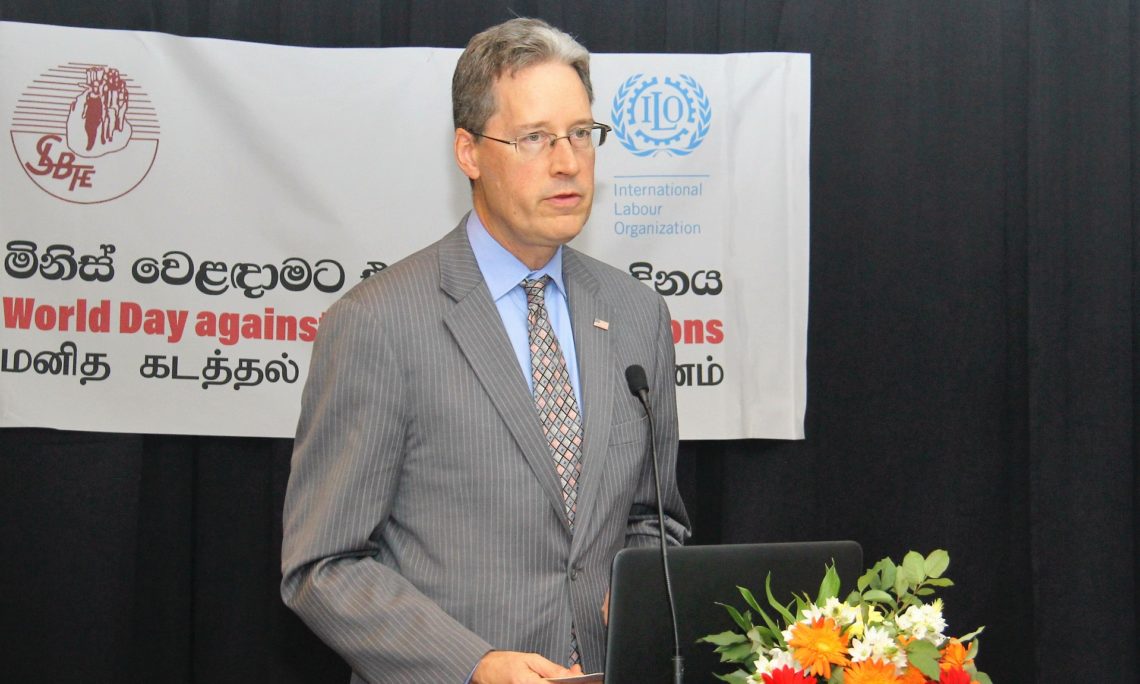 Thanks very much.  Thank you for the opportunity to say a few remarks and to join you on this, the World Day Against Trafficking in Persons.  Special thanks to Simrin Singh and to the team at the ILO for organizing this event.

Earlier today the ILO, together with the Bureau of Foreign Employment, held a march to raise awareness of human trafficking.  Some of you may have been there.  Human trafficking is of course a problem which affects countries around the world.  The United States is no stranger and is not immune from this problem anymore than anyone else is.

I want to congratulate the ILO and the government of Sri Lanka for the successful march that took place and for raising the profile of this important issue.  It is estimated there are some 25 million victims of trafficking globally, but regrettably, only a fraction of them are identified.  That is why studies like the one that the ILO has undertaken are so important, to help shed light on the prevalence of human trafficking and the populations that are most vulnerable to becoming victims of trafficking so that we can more effectively combat this critical human rights challenge.

The United States is committed to working with civil society, international organizations, and the government of Sri Lanka to combat trafficking in persons here.

Currently, the U.S. Department of State funds three grants in Sri Lanka with a total value of approximately $2.5 million, including the grant to the ILO that supported this study.  These grants engage on a wide variety of activities including, for example, helping to strengthen the judiciary to investigate and prosecute trafficking cases, building an effective trafficking data collection and reporting system, and improving services and protections for trafficking victims.  Our partners, complementing the ILO’s work in these efforts, are The Asia Foundation and the American Bar Association.

These efforts, of course, complement and support the important work that the government of Sri Lanka is itself doing to address human trafficking.  I want to commend the government of Sri Lanka for progress in areas like identifying potential trafficking victims and amending legislation to make it possible to collect evidence and statements from victims or eyewitnesses who are overseas.

But there is, of course, more work to be done.  I encourage the government of Sri Lanka, including the National Anti-Human Trafficking Task Force, to make progress on the critical issue of prosecuting and convicting perpetrators, improving protection services to victims, and promoting safe and legal migration.

Thank you all for your participation in this event.  I trust the presentation and the ensuing discussion will be productive in our shared fight against trafficking in persons.  And thanks again to the ILO for undertaking this important effort.  Thank you all.