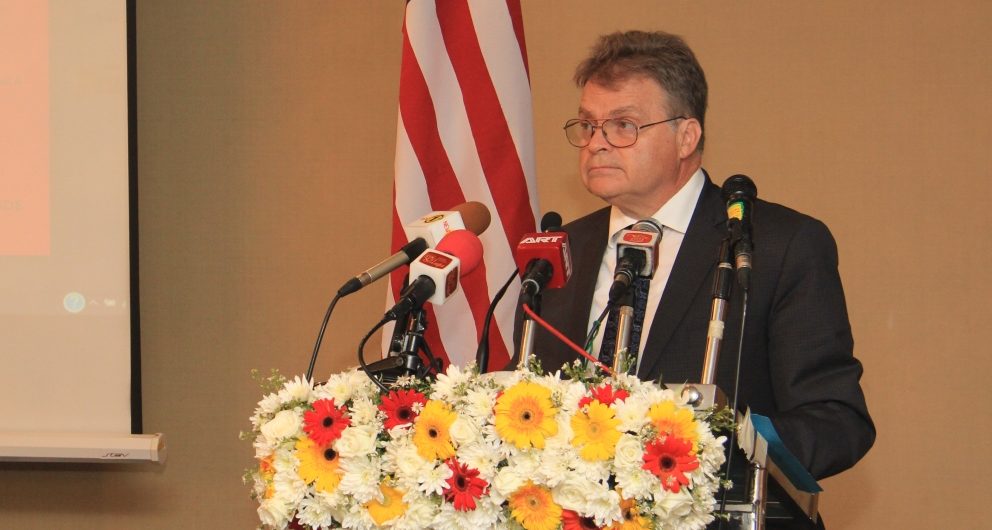 Good Morning. I want thank the government of Sri Lanka, particularly minister of Development Strategies and International Trade, Honorable Mr Malik Samarawickrama for hosting this intersessional meeting today.  As a relatively small island economy, Sri Lanka’s economy depends, to a considerable extent, on international external trade. As has been mentioned, the U.S. has been Sri Lanka’s largest trading partner. Sri Lanka’s trade with the U.S. is important bedrock of the economy, accounting for many thousands of jobs across the island.

The overall trade performance of Sri Lanka has been in decline for some time. One common way of measuring a country’s external trade performance is to measure the volume of external trade with the GDP of the economy over time. If you do that with Sri Lanka you will find that the share of external trade as a percentage or portion of the overall Sri Lankan economy has been a decline. In fact it has declined quite precipitously over the past couple of decades.  Now this decline is especially concerning given the urgent task of national reconciliation. It is the axiomatic that if you want a liberal society you need a growing economic pie. While I don’t reduce everything to economics, I do firmly believe that the task of national reconciliation will be made much easier in an environment characterized by rapid economic growth and job creation. Conversely, the task of national reconciliation will be all the more challenging in the environment of stagnant or even declining growth and employment prospects.

The main objective of our joint action plan is to reverse the unfavorable trade trends that I aside earlier. We aim to progressively eliminate the various legal and policy obstacles to greater trade and investment in Sri Lanka. We think we know what those obstacles are, we want to sideline them. A 21st century internationally and regionally integrated economy allows goods, services, and people to move expeditiously in and out of the country. We aim to grow the role of external trade and investment and in the process; we aim to create jobs and prosperity for the people of Sri Lanka.  That’s what this exercise, what we’ve been going through, what we’re doing today, that’s what this is all about.

I’m no stranger to Sri Lanka. I have been here many times; I’ve been coming here for decades. I recognize that most Sri Lankans value their families above all else. People for the most part, work for their children. They work in the hope that their children will have a better life then they had. The idea logs in my observation are idea logs that are few in number. So I firmly believe that if Sri Lankan leaders can create an enabling economic environment for growth and prosperity and jobs, good jobs for all. I’m very very confident that all will be well. Thank you Mr. Minister Malik Samarawickrama. Thank you