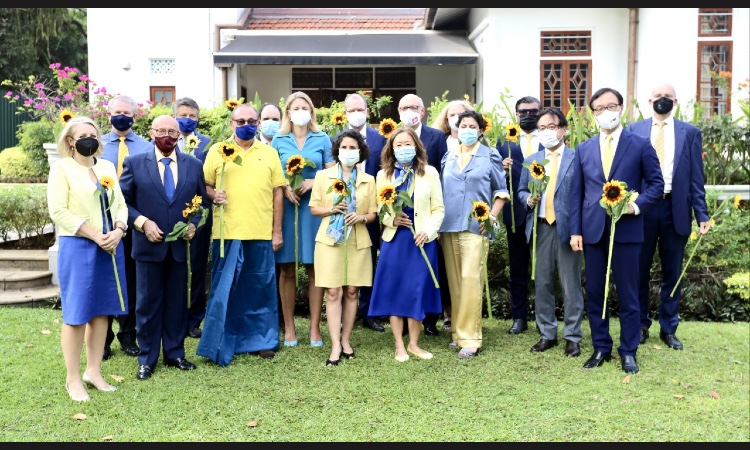 COLOMBO, March 11:  Seventeen Ambassadors and High Commissioners to Sri Lanka gathered in Colombo on Friday to stand together as an expression of their solidarity with and concern for Ukraine.

Nations around the world are denouncing Russia’s unprovoked aggression against a sovereign country and demanding immediate end to the military operations in Ukraine.  On March 2, 141 U.N. General Assembly Member States voted together to condemn the Russian government’s war in Ukraine.  And in Sri Lanka today, representatives of Australia, Canada, European Union, France, Germany, Italy, Japan, Korea, Maldives, Netherlands, New Zealand, Norway, Romania, Switzerland, Turkey, the United Kingdom, and the United States gathered to express their grave concern at the deteriorating humanitarian situation and united support for the Ukrainian people’s plea to end the war.

U.S. Ambassador to Sri Lanka Julie Chung said: “The United States is proud to stand together with so many other nations to support the Ukrainian people’s right to live peacefully in a sovereign, democratic country – free to choose their own future.”

Russia’s war has caused a period of unprecedented unity among world leaders.  People around the world continue to gather to protest President Putin’s choice of war, including many thousands of citizens in Russia and Belarus protesting peacefully.

While talks between Ukraine and the Russian Federation are now in progress, voices around the world – including these seventeen Chiefs of Mission here in Sri Lanka – will continue to call for Russia’s immediate halt of its invasion and withdrawal of forces from Ukraine.