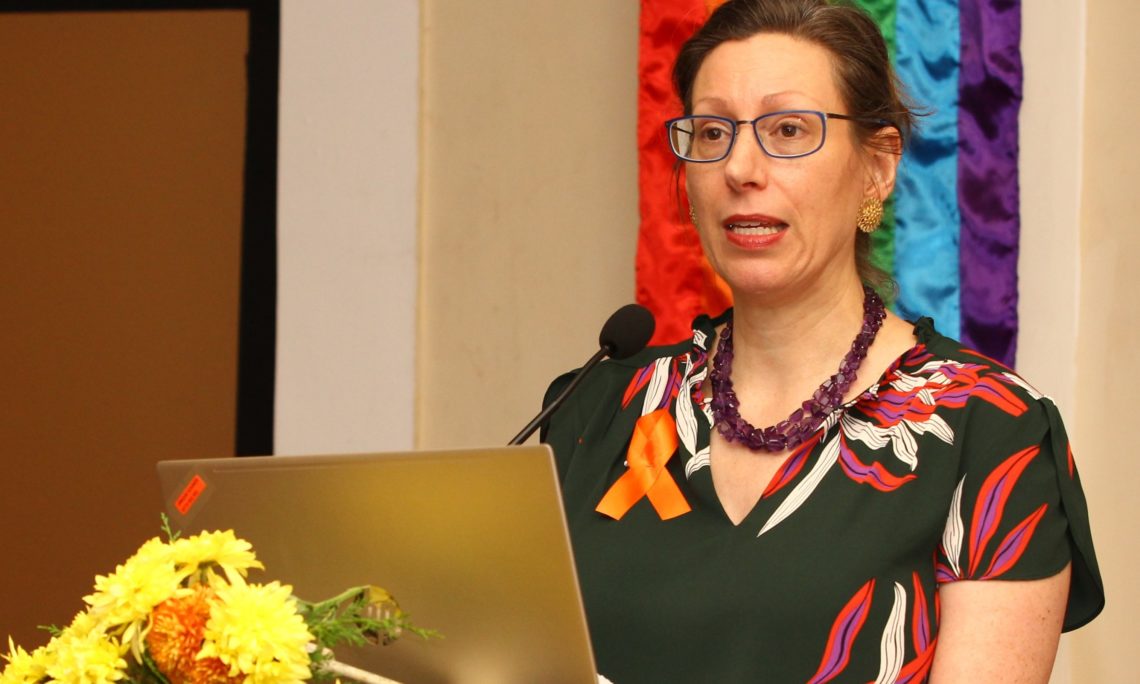 I want to than Equal Ground for inviting me to speak tonight to mark on International Human Rights Day, and of course it’s the last day of 16 days of Activism Against Gender Based Violence.

As Rosanna told us, the struggle to universally enshrine and protect human rights is not a new one.  It was December 10, 1948 that the UN General Assembly adopted the Universal Declaration of Human Rights, and it proclaims a simple, powerful idea: that all human beings are born free and equal in dignity and rights.  This powerful proclamation continues to guide the global community aspirations for greater security, freedom, and justice as well as economic and social progress.

So our formal global commitment to protect the rights of all people is not something new, but it is a goal that we continue to aspire to, something we have not yet realized.

Even though work remains ongoing there is much progress to celebrate.  Since the Declaration was adopted, countries across the world have made great strides with respect to human rights and human reality.

The world came together all those years ago in order to identify our shared values and determine how to achieve them. This was an important step in 1948, but that first declaration we know in essence was just a conceptual framework.  It did not help us get down to the ground reality.  We need to continue with our collective understanding of the rights to which every human being is entitled.

From these principles the international community has focused on implementing a number of human rights treaties and conventions because they further negotiate to clarify that original declaration.  Plans of action have been developed to realize this vision, but it has taken a very long time.  Enough time, in fact, that our goals and objectives have had to change to reflect the times.

So 20 years ago the world met again and agreed to the Millennium Development Goals.  These goals formed an ambitious international agenda to advance peace and security, development and human rights while protecting the environment and fighting poverty.

To carry this progress forward, because that still was not enough, the world came together yet again in 2015 and agreed to the Sustainable Development Goals.  The SDGs are a way to achieve a better future for everyone.  Sri Lanka, of course, joined other nations in committing to the SDG agenda and has taken active steps to accelerate their implementation.  I was delighted to hear President Rajapaksa say in his inauguration speech that he would continue to actively fulfill these commitments.

There are 17 laudable SDGs, but I want to talk about specifically, although briefly, SDGs 10 and 16.  Starting in reverse order, I want to share with you the goal statement for SDG 16, and it is “to promote peaceful and inclusive societies for sustainable development, provide access to justice for all and build effective, accountable and inclusive institutions at all levels.”  Achieving this goal requires reform in institutions across the societal spectrum including in critical institutions such as the police and the judiciary.  Countries like Sri Lanka need law enforcement and judicial institutions that are better able to recognize and put an end to human rights violations through the proper treatment of victims, humane treatment of detainees and suspects, and the transparent, evidence-based prosecutions of those who abuse the fundamental rights of human beings.

Media is another institution important to achieving SDG 16.  They can better report on violations wherever they exist and inform the broader public on the problems and potential solutions.

SDG 10 calls for action “to reduce inequality within and among countries.”  By 2030, all countries should empower and promote social, economic and political inclusion of all, despite color, gender, social status, sexual orientation or physical abilities.  This is something that we can, all of us, both personally and institutionally help to address no matter where we are.

By 2030 we should ensure that equal opportunity and that we reduce barriers that prevent individuals from contributing to and benefiting from mechanisms of society based on their gender or color, their sexual orientation or any other factors that separates them from the majority.

So what am I saying?  That respect for human rights is going to deliver economic development.  That’s why they are called Sustainable Development Goals.

Respect for human rights is one of the keys to economic growth, and inclusive economies are proven stronger and more durable.  Sri Lanka is increasingly connected to the global economy and multinational corporations increasingly care about reputational risk.  Protecting fundamental rights through meaningful, institutional reforms provides reassurances to investors that Sri Lanka is not a reputational risk and thus is a good place to invest.

In Sri Lanka, as in many countries, a first step to realizing both SDG 10 and SDG 16 is to eliminate discriminatory laws, policies and practices.  Sri Lanka’s current labor laws, for example, do not explicitly prohibit discrimination based on gender.  Eliminating discrimination in hiring by enacting labor reforms would support Sri Lanka’s broader economic development goals.

We know that inequality based on sex and sexual orientation continues to persist across the world.  This inequality threatens long-term social and economic development.  It harms poverty reduction and destroys people’s sense of fulfillment and self-worth.

By 2030, every country should have adopted policies, including social protection policies to progressively achieve greater equality for all people.  That’s what all countries committed to when they subscribed to the SDGs and I know that this is possible for Sri Lanka.

The United States has a long history of advancing the rights of citizens by supporting and assisting marginalized and vulnerable groups.  We continue to promote LGBTIQ equality efforts through the integration of rights and empowerment and policy practices and initiatives.

So let me close my remarks with some food for thought.  I offer you a quote from Eleanor Roosevelt who was a driving force in creating the 1948 Charter of Liberties.  She was a human rights champion.  She said, “Where, after all, do universal human rights begin? In small places, close to home – so close and so small that they cannot be seen on any maps of the world. Yet they are the world of the individual person; the neighborhood he lives in; the school or college he attends; the factory, farm, or office where he works. Such are the places where every man, woman, and child seek equal justice, equal opportunity, equal dignity without discrimination. Unless these rights have meaning there, they have little meaning anywhere. Without concerted citizen action to uphold them close to home, we shall look in vain for progress in the larger world.”

I appreciate the hard work done by Equal Ground and other organizations to advance equality, to fight discrimination, and uphold the rule of law.  It will take more than the government to realize the vision outlined in the Sustainable Development Goals.  It will take all of us to create that more equal future, a future in which no one is left behind.