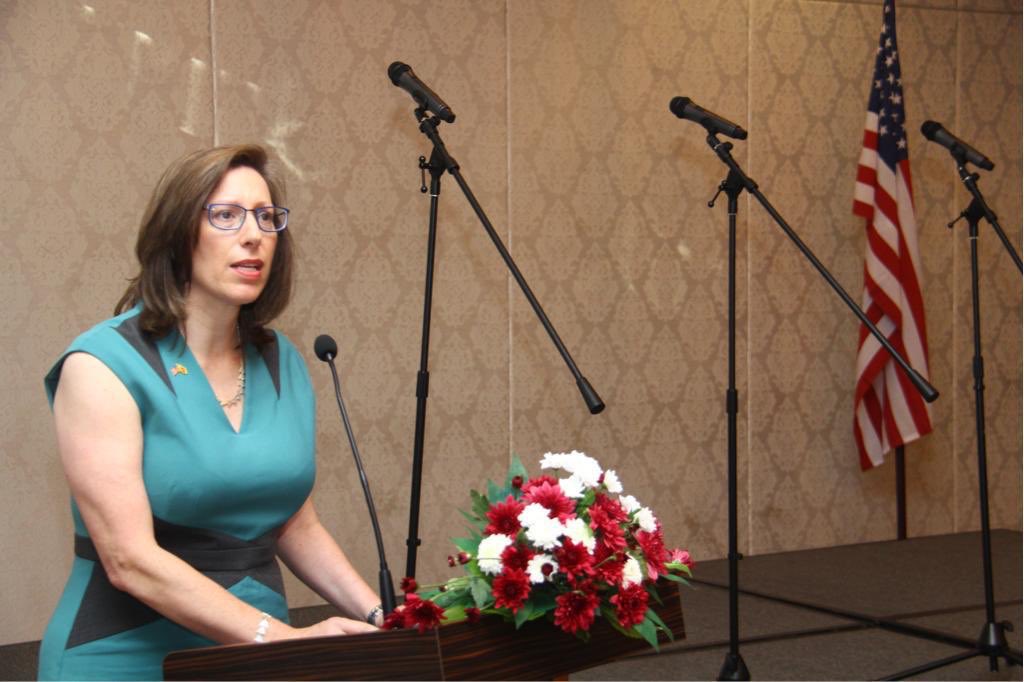 Thank you for the kind introduction.  I’m very delighted to be here.  I think as I’ve said to several of you as I walked in, the first four weeks of my time in Colombo have been consumed by events that you’re reading about in the paper every day, and I have a few reflections on that.  But let me say first that I think that as we approach the holiday season it’s always a time to reflect some on the past – and the record of accomplishments of the Chamber is, I think, very significant.  It sounds like this is a very active group and I’m looking forward to working with the members and the executive team to see what we can do to enhance American investments and business connectivity with Sri Lanka.

It’s also a time to think forward, into the future, and what is that going to bring?  My team is very eager to be engaging, taking the relationship to the next level, but also advocating for those very important policy and regulatory changes that will make a difference in this environment.

Our investment relationship does continue to grow, and I noted that in the past ten years, in fact, two-way trade has increased by 40 percent.  In 2007 we were at $2.3 billion and we’re up to $3.2 in 2017.  In 2018, although it has been a momentous and challenging year, actually it is projected to be strong for both of our countries and I certainly hope that’s the case.

The United States remains a top export market for Sri Lanka, and American companies remain among the largest foreign investors in this country.  We’re bringing thousands of jobs, skills, new technologies, and the highest ethical and workplace standards to the business environment here.  I think that’s a set of accomplishments around which you all certainly can be proud, but around which I am also proud.  I think for our two countries it really helps explain the quality of the relationship that we’ve got between the United States and Sri Lanka.

I noted the political environment, though.  I think this growing relationship is truly at risk, and I worry about that because things have been looking up and that’s the trend line I’d like to see continue.  Political crisis really has consumed much of my attention since I arrived, and I think it is a crisis that not only threatens Sri Lanka’s democratic institutions but really threatens Sri Lanka’s economy and some of the accomplishments of the past several years.

While some economic indicators were already trending downward, looking at the October numbers I think that the crisis has simply accelerated a bad trend.  And not only making it worse, but I think probably pushing consequences well into the new year that others, particularly our colleagues in the political environment are not really thinking about at this time.

Economic growth projections have been lowered.  The Sri Lankan rupee has been depreciating despite interventions by the Central Bank.  Tourism operators are reporting between 12 and 30 percent in booking cancellations.  Development partners, including the United States have put projects on hold.  And I think Sri Lanka’s ability to finance their $5.6 billion of debt that is due in 2019 is going to be a challenge.  Moody’s downgrade of the sovereign debt rating obviously has had a big impact on investor confidence, and I think that that is a trend that can be reversed, but it’s going to take a lot of work.  The work is going to be even more challenging if the political crisis cannot be resolved promptly.

What about that?  So what are we doing?  I know probably many of you in your own ways with your own connections have passed the message that this crisis is not good for business.  It’s not good for business here in Sri Lanka and it’s not good for Sri Lanka’s many partners and friends.  And I, as a friend of Sri Lanka, and the country I represent is a true friend of Sri Lanka.  We have urged politicians on all sides of this situation to reach a quick political solution.  A political solution, importantly, that is transparent and democratic and is going to yield a legitimate government that can be well recognized the world around.

We support a resolution to the crisis because of these extensive ties — economic, security, development, people to people.  But fundamentally we support a resolution because of the damage that’s being done to the country and to the people with whom we are partners here.  Certainly continued uncertainty is bad for business and it’s bad for the people of Sri Lanka.  That’s not something we wish on a friend and partner.

In expressing these hopes for a prompt and transparent resolution to the political crisis I actually believe that we’re modeling the best kind of friendship that we could have, and that is one that’s characterized by candor and characterized by honesty.  Our advice and opinions are not interfering.  This is something I’ve read a lot about in the newspapers over the last couple of weeks.  Interference is phony Facebook groups that polarize voters, you know, bots sent off into the night and you don’t know where they come from.  Or it’s money exchanged behind a closed door.  That is not the kind of transparent relationship the United States has in Sri Lanka, and – I know – not the kind of relationship that should be characterizing our business community either.  Instead, transparent statements of policies and our hopes and wishes for our good partner in Sri Lanka are I think what, again, exemplify the quality of our relationship.  We’re up front about our concerns.  We say the same thing in public that we say in private.

And I think it’s also part of the tremendous respect that we have for this country.  We have concerns more broadly around the region, as well as hopes and aspirations.  We want to see a free and open Indo-Pacific, and President Trump very recently said it’s in America’s interest to have partners throughout this region.  Partners that are thriving, prosperous, and dependent on no one.  This is about mutual respect fundamentally in our relationship.  As a friend and a champion for democracy and human rights globally, we really have an obligation to provide our assessment of how this very damaging political crisis in Sri Lanka can affect our bilateral relationship as well as how it’s going to affect Sri Lanka.

So as we look forward, moving past the present for the moment, as I said in my staff meeting this morning, let’s get beyond this depressing topic and talk about what it is we can do and our hopes and aspirations for the future.

What are those hopes and aspirations?  Where can we go?  I noted as I started my remarks that we’d like to see growth in the trade and investment relationships.  I think that sustainable and equitable economic growth is eminently achievable in Sri Lanka and through virtuous investments, very reciprocal trade, we can all be there together.  Sri Lanka, in fact, is a critical lynch pin in the Indo-Pacific region and our trade in this region is worth more than $1.8 trillion annually.  Our total regional investment in the Indo-Pacific is also nearly one trillion.  That’s more than China, Japan and South Korea’s investments combined.

There is a lot of opportunity here and I know that the United States can be part of that engine for growth.

In a recent Opinion editorial, our Vice President, Vice President Pence, highlighted the passage, in fact, of the BUILD Act.  This is new legislation in the United States meant to strengthen our ability to invest and work with countries around the world.  It’s going to expand U.S. development finance capacity to $60 billion; and it supports U.S. efforts to help world class ports and airports, roads, railways, pipelines, data lines, and other projects that are going to produce tangible benefits for host countries and for the United States.  And we’re ready to build things with Sri Lanka as I know many of you also are ready to do.

We also believe in a vision that has the private sector helping to drive development and growth.  Even though I emphasize the role of the government, because after all that is my  job, I know that real economic growth and connectivity comes from the activities of all of you – your engagement, the relationships and the ties that you build across national borders, and we’re counting on that as well.

So during the coming months I look forward to hearing from you about the business environment here, the community, and how we can reach some of these economic aspirations.  And importantly, how we can remove some of the barriers to trade and investment.

I learned recently that AmCham had commissioned a trade and investment report.  I really look forward to reading that.  I even more look forward to taking action on it and using our platform as an advocate for removal of those barriers and ensuring that there is a fair and welcoming investment environment here.

The embassy’s also going to continue to support Sri Lanka’s economic growth through development and technical assistance.  We are committed to making this partnership work for the lasting benefit of both of our countries, and that’s what it’s really about is the mutual benefit that we can all obtain.

So I want to thank the AmCham, thank the President and the Executive Board for hosting this today, and for inviting me to speak with you.  Thank you for listening, taking a few moments out of the networking event.

I wish you all happy holidays, and I look forward to working with you in the months and years to come.