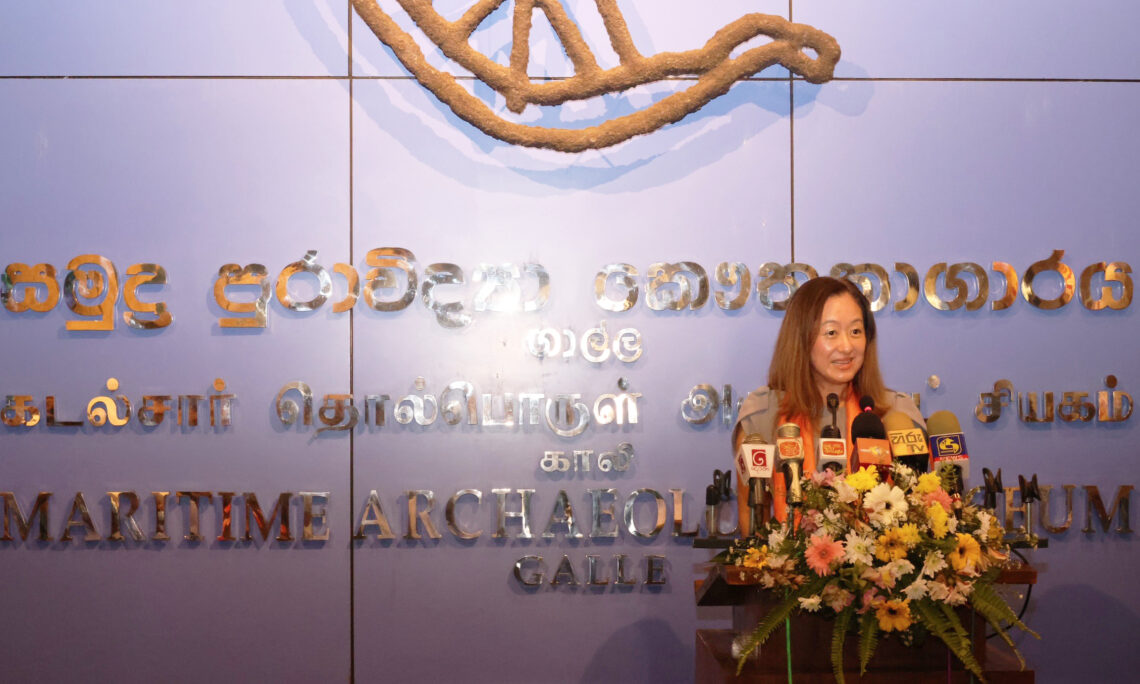 Secretary to the Ministry of Buddhasasana, Religious and Cultural Affairs,

Officials from the Department of Archeology and the Central Cultural Fund,

Members of the Maritime Archaeology Unit and the Conservation lab,

Officials from the Maritime Archaeology Museum, other esteemed guests, friends, partners, and members of the media

Good morning.  It is fantastic to be back in Galle for another visit to the beautiful Fort.  On the way into here this morning, I caught a glimpse of the coastline and glimmering ocean, and so it seems that this is the ideal location to gather with you today to announce the start of our newest U.S. Ambassadors Fund for Cultural Preservation project.  Here, in the Maritime Archeology Museum, I have the honor to stand alongside the Secretary to the Ministry, to launch the Scientific Documentation and Conservation of exposed artifacts of the Godawaya Shipwreck site here in Sri Lanka.

Over the next two years, the Central Cultural Fund’s Maritime Archeology Unit will work on documenting and conserving the Godawaya shipwreck located in the Southern Province near the Hambantota International Harbor.  One of Sri Lanka’s oldest known shipwreck sites, artifacts were initially discovered in 2008 by two Sri Lankan fishermen and divers.  Then, the Maritime Archaeology Unit followed the trail to find the shipwreck itself and begin their efforts to understand the site and protect it.  Imagine a shipwreck, 32 meters down in the water, settled on the seabed.  That is where the maritime archeologists must reach, by diving, to document, conserve, and protect the artifacts – research that will someday hopefully answer some important mysteries about the origin of the ship, its contents, and how it met its watery grave.  This is not easy work – or easy diving – but it is deeply meaningful and truly important, and I hope to be able to see it in person someday.

The United States is proud to support Sri Lankan maritime archeologists in their quest to document and protect this important shipwreck.  This project immediately captures the imagination and there are so many questions for the archeologists to uncover.  Regardless of what the scientists and archeologists studying the site deduce, one thing is for certain: the presence of the Godawaya shipwreck reaffirms Sri Lanka’s long-standing and essential role as a trading partner, a friend, and a beacon of safe and open harbors for explorers, traders, and nations across the Indo-Pacific.  That is an incredibly important reputation, and one continues to serve Sri Lanka to this day.

While the Godawaya history goes back to between the first and second centuries BCE, standing here in Galle makes me think of more recent history.  The first formal U.S. presence on the island was the American Commercial Agency, whose first office was in Galle, until 1870.  We’ve come a long way from there; just a few months ago, I moved our Embassy into a brand new, environmentally sensitive building in Colombo that’s really a testament to our commitment to the people of Sri Lanka.  And in just a couple of months, we’ll begin celebrating the 75th anniversary of diplomatic relations between our countries.

The longevity and depth of that relationship is important to me.  The Godawaya project is not a one-time thing.  Rather, this is the latest of over a dozen cultural preservation projects the United States has partnered with Sri Lanka on over the last 17 years.  Previous projects include documenting monasteries at the UNESCO World Heritage Site in Anuradhapura and a project with the University of Peradeniya to preserve four endangered traditional and indigenous ritual music and dance forms and related craftsmanship from the Adivasi, Tamil Hindu, and Buddhist communities.  Earlier this year, I had the pleasure of taking part in the opening ceremony of a multi-year project to conserve the Old Kandyan Kings’ Palace and upgrade the Archaeology Museum there so that tourists from around the world can increase their understanding and knowledge of Sri Lanka’s rich cultural heritage.  In all, these projects represent over $1 million dollars of funding from the United States.

I am very proud to lead a Mission that respects, honors, and helps to fund the identification, preservation, and study of  Sri Lanka’s amazing and valued cultural heritage.  This is the main purpose of the Ambassadors Fund for Cultural Preservation.  We are proud to sponsor projects like this, identified by local experts and undertaken by Sri Lankans.  Your efforts improve preservation and expand the potential of our understanding of history while making way for the future in tourism and increasing the capacity of the next generation of archeologists.  Thank you for your responsible and expert stewardship of this project and I look forward to visiting you in Hambantota after your team has made more progress next year.