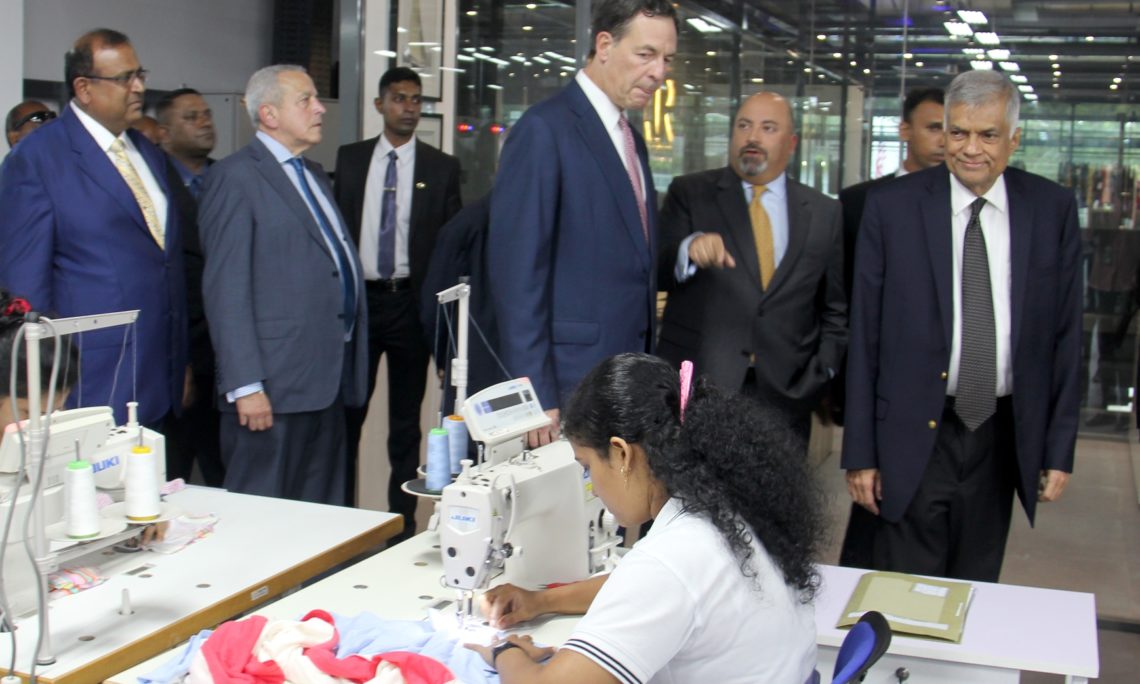 Ambassador Atul Keshap and Prime Minister Ranil Wickremasinghe attended the inauguration of an innovation center created by Star Garments, a division of the U.S.-based Komar company, last week.  “American companies bring the best and highest standards of ethics, of design, of innovation, of technology, of responsible management, and absolutely cutting edge environmental responsibility,” said Ambassador Keshap.  “We believe in what companies like Komar and Star, all of the workers here, the government and the people of Sri Lanka are trying to achieve.”

It’s good to see all of you here.

I tell you, this is a real wonderful day to be a U.S. Ambassador in Sri Lanka.  The Honorable Prime Minister has been asking me what are American companies doing here?  You know, how are they contributing to the success of the people of Sri Lanka?

And I’ve been privileged to tell him in conversations that we collectively as an American businesses presence in this country have at least 30,000 or 40,000 employees across many venues and companies that are pursuing different sectors, and those companies and those employees contribute tremendously to the GDP and to employment rates in Sri Lanka, and they contribute to the prosperity not only of Sri Lankans, but to Americans as well. And the American companies that are here do highly advanced, highly technical work, and because as the Prime Minister said, the work force here is really special, and what has been happening in Sri Lanka over the last couple of years is really special.

Friends, Secretary Tillerson made a speech yesterday in Washington where he talked about the American approach to the Indian Ocean region and more broadly to the Indo-Pacific region.  Secretary Tillerson said that America has been an Indo-Pacific power for a long time.  Not because we are a power that is seeking conquests or territory, but because we believe in win/win solutions.  Americans have helped and put a lot of effort into creating a global operating system from rules and values that contribute to the well-being, not only of the United States and the peace and security of the United States, but to the prosperity and well-being of the entire world.

Friends, American companies bring the best and highest standards of ethics, of design, of innovation, of technology, of responsible management, and absolutely cutting edge environmental responsibility.  It is amazing to be in this building, one of only a handful on the entire planet that manages to attain the level of environmental sustainability and responsibility of this structure.  It is a reflection of the leadership that American companies like Komar bring as partners when they invest in countries like Sri Lanka.

Honorable Prime Minister, we believe very much in the vision that you and the President are trying to achieve for this country.  We believe in what your voters have expressed as their vision of a democratic, peaceful, prosperous, happy Sri Lanka.  A Sri Lanka with high quality jobs and prosperity for all of its people.  A Sri Lanka that is at the hub of the entire Indo-Pacific.

As an embassy, the United States is trying to ensure that prosperity through training programs on trade facilitation.  We’re trying to make sure that our development partnership of 60 years continues to provide high-value advice and insight for the development of the Sri Lankan economy on transparency, rule of law, expedited shipping and training.  We also have the Millennium Challenge Corporation that is interested in coming and working with the people of Sri Lanka.  We’ve got a robust and thriving security relationship between our militaries, and on counterterrorism and law enforcement.  There is so much we’re doing together because we believe in what companies like Komar and Star, we believe in what all of the workers here, we believe in what the government and the people of Sri Lanka are trying to achieve.

This is a wonderful day.  It makes me very very happy.

I’m not from New Jersey, I’m from Virginia.  So a little bit down the coast.  But I have to tell you, it’s great to see an American company providing such responsible leadership and such friendly and sustained partnership with such great Sri Lankan partners as Star.

Honorable Prime Minister, it’s great to have you here as well.

So on behalf of all the women and men of the American Embassy, I really want to offer my sincere congratulations for all of the hard work that came into making today a success.