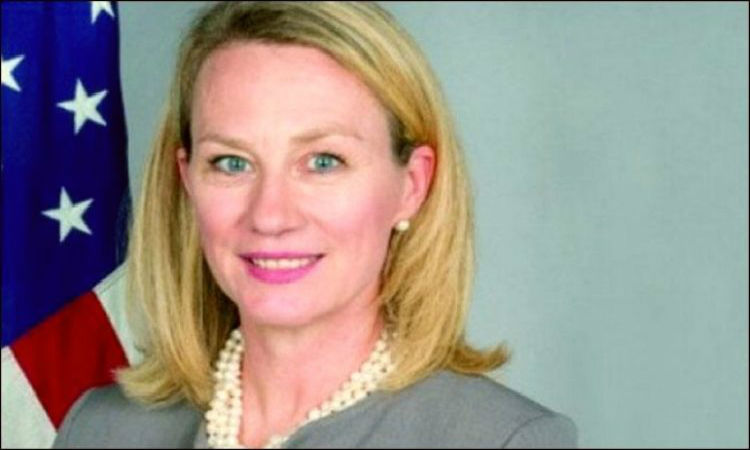 Ambassador Wells:  — I want to thank our hosts for this vitally important Track 1.5 dialogue.  It’s a real pleasure to be here.

I’d like to focus my remarks on two distinct ways in which the United States has taken concrete steps today to deepen our commitment to the Indian Ocean region and to help to advance a collective vision for a safe and prosperous future.

The first is by making new investments in support of maritime security.  Working with our Indian Ocean partners to expand maritime capacities, to promote greater information sharing, and to ensure free and open maritime domain that is the life blood of the region’s security, stability and prosperity.

But the second is by supporting greater private sector engagement as the best and really only means of creating long-term sustainable and inclusive growth.

Before I turn to those subjects, however, I do want to recognize the Maldives, an Indian Ocean country, for its recent successful national election.  The United States congratulates the Maldivian people for their enthusiastic exercise of democratic rights in the face of significant obstacles.  And I want to congratulate President-Elect Solih on his victory and affirm that my government is eager to work with President Solih and his government to advance our shared goals in this region.

So let me outline some of the practical steps that the United States is undertaking to support maritime security.  We recently launched our own Bay of Bengal Initiative to help countries build the capabilities and information-sharing networks necessary to effectively address security challenges and natural disasters.  As an initial element of this program, we’re providing $39 million to support Sri Lanka’s coastal maritime radar system, to provide training and equipment for improved surveillance response and interdiction.  The United States also recently transferred a high endurance naval cutter to further improve Sri Lanka’s maritime capabilities.

Now these increased capabilities are essential tools for combating the illegal, unregulated and unreported fishing, piracy and smuggling as well as other forms of transnational crime.  And we’re designing our efforts to complement our partners’ work in the region.

Working trilaterally with India and Japan and quadrilaterally with Australia, we’re exploring the principles and the practicalities of maritime domain awareness and security.

These exercises help to build crucial habits of cooperation to respond to incidents effectively and efficiently.

Now while these investments in maritime security seek to develop physical capabilities, we also recognize the importance of deepening people-to-people ties which foster the human connections that will help societies work better together, including to address security challenges.

So for this reason the United States recently established a fellowship for the Indo-Pacific Security Studies, an exchange program that aims to increase civil society participation in security affairs, as well as support the inclusion of women and minority experts in these vital conversations.

I would like to now turn to my government’s efforts to promote private sector opportunities and economic growth.  These U.S. initiatives are based on the recognition that only the private sector has the resources to fully support transparent and sustainable development in this critical region.  Market economies, free trade, private sector finance and open investment environments have driven the Indo-Pacific’s economic success so far, and are the key to ensuring that the Indo-Pacific region remains the engine of economic growth that’s been discussed at this platform.

That is why in July Secretary Pompeo at the Indo-Pacific Business Forum announced three new initiatives designed to better position the U.S. government to support private sector growth in the region.  These initiatives will focus on infrastructure, digital economy, and energy.

As well, we’re excited about the BUILD Act which was signed by President Trump this week.  The BUILD Act establishes a modern U.S. development finance institution that would empower entrepreneurs, create jobs, and reduce poverty in partner countries.  Under the BUILD Act, the new U.S. Development Finance Corporation will have a lending limit of $60 billion, doubling the amount that had been available for its predecessor.  Importantly, the new Development Finance Corporation will also be empowered to make equity investments overseas, as well as to conduct feasibility studies to more effectively identify new investment opportunities.  It will also continue to make loans and provide political risk insurance.

So even as we’re increasing the U.S. government’s ability to help identify and finance feasible commercial projects, I want to stress that we’re also supporting countries in improving the domestic business climates through USAID, through the Department of Treasury and Commerce, through collaboration with business chambers and industry groups, we’re helping countries create business climates that are critical to promote trade and attract not only domestic, but foreign investment.

We’re also working closely with like-minded partners in the region.  For example, President Trump and Prime Minister Abe recently announced a variety of cooperative bilateral projects in Bangladesh and Sri Lanka.  And ASEAN, which is critical to all of our efforts, we’re work with to promote cyber security defense of critical infrastructure.

So the two sets of initiatives that I’ve described which will focus on improving maritime security as well as energizing private sector to spur investment and growth, underscore the United States’ commitment to remain a valuable partner for the Indian Ocean region, which is a lynch-pin of our broader Indo-Pacific strategy.

But let me highlight a major challenge facing all of us and that is the need to strengthen regional connectivity.  With half of the world’s population and a quarter of its economic output and the fastest-growing economies, the Indo-Pacific is indeed the most dynamic region in the world.  However, the Indian Ocean is also one of the least connected on this planet.  According to the World Bank, South Asia inter-regional trade constitutes less than five percent of the region’s total trade.  By comparison among ASEAN countries, there’s 25 percent total trade.  Among European countries, 60 percent.  It is less expensive for India to trade with Brazil than with some of its neighbors.  Poor trade and infrastructure and restrictive rules and regulations for border trade are key factors that are going to limit the capabilities of this very dynamic region.

The World Bank estimates that removing barriers and streamlining customs procedures would nearly quadruple inter-regional trade from $28 billion to $100 billion in South Asia.

But clearly, more needs to be done.  We look forward to the discussions today and throughout this conference as we look to define this new future in the Indian Ocean.  I can assure you that the United States has never been more committed to ensuring a free and open Indian Ocean region as part of a larger Indo-Pacific, and we welcome the opportunity to work with all of our partners to create an Indo-Pacific region in which each nation, to echo President Trump, “is strong, prosperous, and self-reliant.”