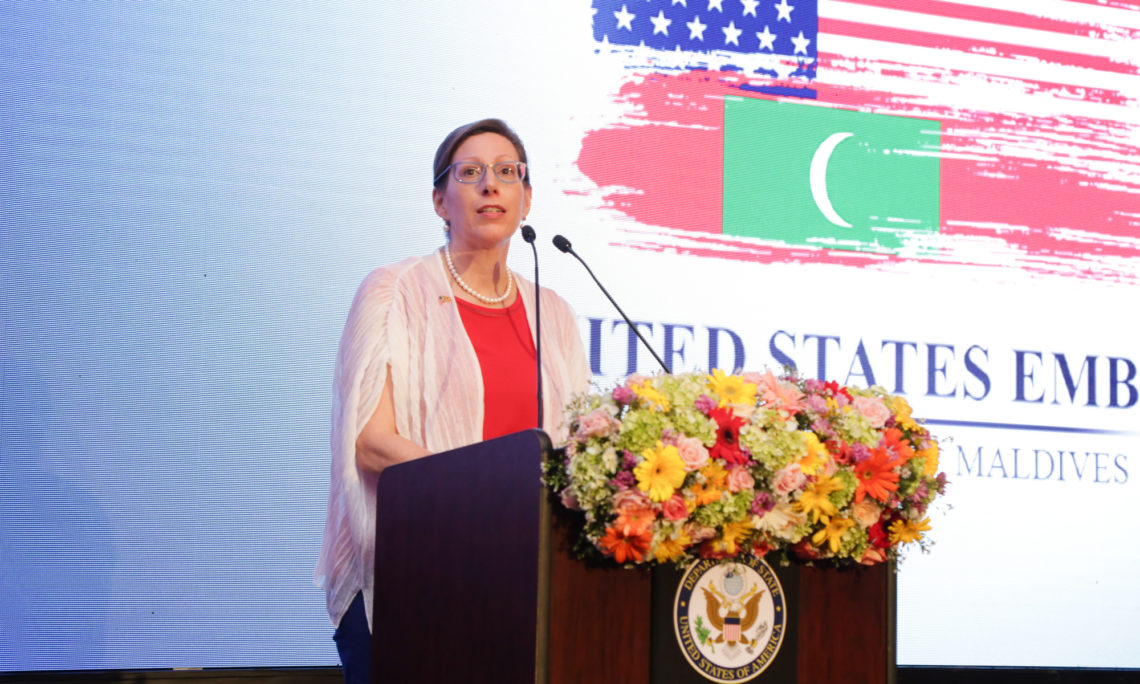 Thank you all so much for joining us tonight.  It is my absolute honor to welcome you to the 243rd Independence Day celebration of the United States of America.

Our theme tonight is “Share America.”  We want to share with you what it means to each of us, my team in the audience here as well as myself, what it means to be an American.  And you will see that our staff members have on these badges.  It shows their home state, the place they were born, please go ahead and ask them some questions about their American experience.  Whether they’re from New York, California, Michigan, Illinois, or somewhere in between, they have a story to share.  And we would appreciate if, in return, you’d share with us a little bit about your home.

We are, I think, too easily captured by diplomatic life here in Colombo.  We go to a lot of meetings, we attend a lot of receptions like this one, but we’d really like to understand not only Sri Lanka better, but all the places around this great world.

To me, being American means many things.  Whether it’s embracing our democratic values or displaying an entrepreneurial spirit.  Importantly, the diversity of our country means a lot to me also as an American and I think it’s a key part of our national identity.

As I come to know Sri Lanka, I think we actually share some similar values and aspirations for our countries.  Some of these values that I just mentioned.

I arrived here last October, and during the past eight months I’ve had the privilege of traveling around this beautiful country, meeting people, and enjoying some breathtaking scenery.  I visited the graves of John Black and his wife Isabelle.  He was the first American Consul to Ceylon in the 1850s.  His resting place is in Galle.  I’ve also seen churches and schools in Jaffna founded by American missionaries.  And in the east, I met women who work in factories established with assistance from USAID, our present-day link.  Throughout the country, I’ve also seen the benefits of the Mahaweli Development Program which the U.S. helped make possible.

There is an important quality to the U.S.-Sri Lankan partnership, and it’s one that I want to emphasize tonight – mutual respect.  Respect for sovereignty.  Respect for quality of life.  And even respect for our differences as nations.

The United States supports a strong, sovereign and independent Sri Lanka.  A Sri Lanka that contributes to security in the Indo-Pacific.  In fact, that’s why I joined President Sirisena last month at the commissioning of the SLNS Gajabahu, the Sri Lankan Navy’s largest vessel, a gift from the people of the United States.

The United States also supports Sri Lanka’s economic development and its path to an economy not reliant on foreign assistance.  That’s why we provide technical assistance to the Central Bank and the Finance Ministry and why the U.S. government is prepared to provide, as a gift, nearly 500 million in poverty alleviation projects through the Millennium Challenge Corporation.

The United States also supports Sri Lanka’s democracy and the strengthening of institutions to protect the human rights of all citizens.  The rule of law is also important.  We want to ensure that everybody is free from fear because of their ethnicity, their religion, or failure to receive due process.  And that’s why we support district inter-religious councils and further education and parliamentary reform.

As a representative of the government and the people of the United States, my team and I will continue to work to strengthen the partnership between our countries.  Two sovereign nations, working towards a peaceful and prosperous future.  A future that – even in the aftermath of the tragic events of April 21 which brought grief to hundreds of families in Sri Lanka, in the United States and elsewhere – a future that looks brighter by the day.  A future, a peaceful and prosperous future, that can be realized through the enduring partnership that we share.

So, I want to thank you again for joining us tonight.  Independent since 1776, the United States has shared 70 of our 243 years as a friend of today’s Sri Lanka, and with Ceylon our connections go back even farther than that, and I certainly think that that is something to celebrate.

So share in America a little bit tonight, and enjoy the evening.  Thank you so much for joining me.